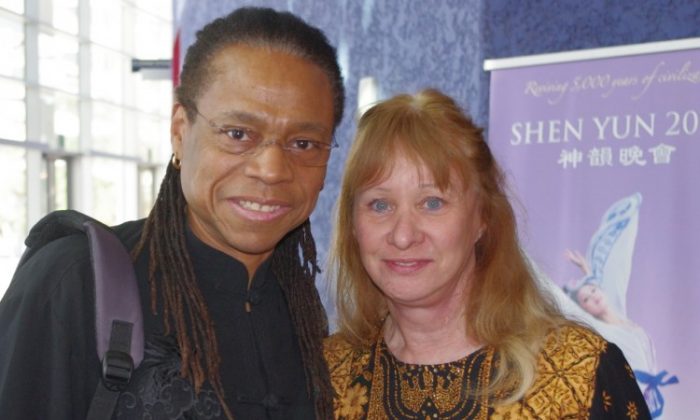 MESA, Ariz.—Shen Yun Performing Arts brought to the stage China’s millennia of culture at the Ikeda Theater in the Mesa Arts Center on Saturday afternoon, March 2.

“Enchanting,” said Dr. Vernon Barksdale, “and peaceful at the same time. It is very nice.”

Dr. Barksdale, a psychiatrist, was formerly the associate medical director for CIGNA Behavioral Health and now works at a community clinic and is also a co-author of the American Association of Indian Origin’s Nutrition Guide to Optimal Health.

Part of Dr. Barksdale’s medical practice is teaching meditation to help people, and he has his own radio show devoted to teaching it. He has a keen interest in Asian culture and spirituality.

Shen Yun portrays China’s ancient culture, reviving it for the modern world. “Chinese culture is … known as ‘divinely inspired,’ and is the only culture in the world to have a continuous recorded history of 5,000 years,” says the Shen Yun website.

A Shen Yun performance tells a number of different stories and pieces of Chinese culture through classical Chinese dance, an art form that has been developed over thousands of years. The dance is supported by a full orchestra playing a unique blend of both Eastern and Western classical music.

“The music is well done. The dancers and the actors have great precision,” said Dr. Barksdale.

But beyond the beauty of the surface, he also saw deeper messages in the performance.

“I really find it unifying that we have this belief that there is something bigger than ourselves that permeates through nature,” Dr. Barksdale said of the spiritual aspect of Shen Yun.

“Our unity with that makes us a greater human being, a greater mankind. I think the Chinese culture epitomizes in a lot of the cultural beliefs, the process of meditation and spiritual development,” he said.

According to the Shen Yun website, traditional Chinese culture is divinely-inspired and classical art forms are not only outwardly beautiful, but also emphasize the artists’ inner goodness and spiritual cultivation.

The portrayal of spirituality extends to the modern day, particularly the spiritual practice Falun Gong, which is deeply rooted in Chinese culture.

“We’ve heard of Falun Gong in the press over the years. I think any time that we have a chance to articulate people’s spiritual freedom and their ability to have that, it’s not a bad thing,” said Dr. Barksdale. Falun Gong has been persecuted in China since 1999, where practitioners face arrest, torture, and death for their beliefs.