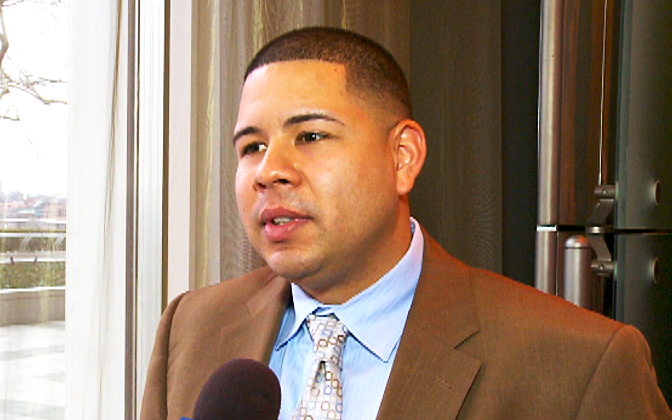 Emmanuel Gomez after watching Shen Yun Performing Arts at the Kennedy Center on the afternoon of Feb. 2, 2013. (Courtesy of NTD Television)
News

“I recommend that he [President Barack Obama] should come—him and the first lady, the family, the whole entourage,” Mr. Gomez said. “From other shows I’ve seen around the world, this one—by far—is the best one.”

Mr. Gomez was particularly struck by the cultural and educational value of this performance. He said that as a Hispanic, he believes that culture is extremely important. And Shen Yun brought him invaluable insight into Chinese culture.

“It gave me a perspective of China, and it’s a great perspective,” Mr. Gomez said.

Founded in 2006 by a group of overseas artists, Shen Yun’s mission is to revive the 5,000 year old, divinely inspired Chinese culture.

Mr. Gomez said the performance was fantastic and amazing. He appreciated the last dance piece, “Divine Mercy,” which is a culmination of a battle of good and evil, according to Shen Yun’s program book. He said the piece was beautiful.

“The message of the show is basically faith, … holding on to your beliefs, to your culture, your roots and to keep going forward. Don’t let those die,” Mr. Gomez said.

Mr. Gomez said he felt that the American people can benefit from watching Shen Yun. “We see all this famine and destruction around the world, even in our country. I believe something like this can open the hearts and minds of people.”

Mr. Gomez was also enchanted by the Shen Yun Orchestra, which accompanies each dance. He said the way it complements the dancers was amazing. “I loved it,” he said.

The orchestra is comprised of both Eastern and Western instruments, creating a unique sound.

“This is how the effect is achieved,” states Shen Yun’s website: “A Western philharmonic orchestra plays the foundation, while traditional Chinese instruments lead the melodies. The sound produced is uniquely pleasing to the ear. The ensemble at once expresses both the grandeur of a Western orchestra and the distinct sensibilities of China’s 5,000-year-old civilization.”

Shen Yun also has a state-of-the-art interactive backdrop that accentuates the dances—helping to bring the audience from snow-shrouded Himalayan peaks to a battle field during the Tang Dynasty.

“I thought it was going to be only dancing, but when they incorporated the music, the live orchestra, and video in the back, everything was so well connected,” Mr. Gomez said. “It’s amazing.”

“I recommend it for everybody,” he said.