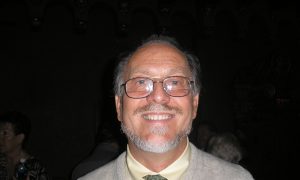 With a background in classical dance, the global marketing manager appreciated the performances of divinely inspired, traditional Chinese culture as it was depicted by Shen Yun Performing Arts International Company at the DeVos Performance Hall on Sunday, Feb. 15.

“It’s obviously a remarkable artistic example of very elegant dancing as well as … a lot of things to learn from a cultural perspective, to learn about China. I think it’s absolutely beautiful,” Ms. Sloborian said.

She added,”It’s a really beautiful show. I also think it’s really interesting the way they’ve incorporated visual cinematography into some of the pieces, so it really makes them that much more important and significant. I’m quite impressed.”

Ms. Sloborian said she was moved by the deeper, spiritual elements they saw in the performances.

“I was very impressed with the specific dance that talked about compassion. That was very significant and I thought, very, very nice. It’s unfortunate that  these dances can’t be shown in China today,” she continued.

She did feel compassion in the performances, and said, “I think compassion is a wonderful value because it makes the entire experience of life a lot more enriching for everybody. If you have compassion towards others and others towards you, then I think life is better for everyone.”

Referring to the performance “Fable of the Magic Brush” she said, “I think it speaks of the value of honesty and goodness and kindness and sharing, as opposed to deceit and deception. I thought those were very nice stories as well as [having] a moral behind it.”

With Ms. Sloborian was her friend, Russian interpreter and teacher, Ms. Elena Gill.

Originally from the Ukraine, Ms. Gill said she had lived close to China, but only learned about its traditional culture and values by watching Shen Yun.

She was impressed by the depth of the performances and said she had learned a lot about Chinese culture. “I didn’t really have an in depth understanding. So it is very interesting. It’s very educational. I learned a lot. It’s really, really impressive. I’m glad I came!”