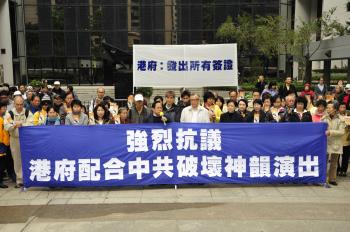 Organizers of Shen Yun's Hong Kong performance hold a press conference on Jan. 23 to protest what they regard as Hong Kong authorities' caving in to political pressure from Beijing. (Li Ming/The Epoch Times)
China

Hong Kong public figures have criticized the decision, claiming that it was a result of political pressure from Beijing. Shen Yun’s artists include practitioners of Falun Gong, a spiritual practice banned and persecuted in China, and its performances include artistic representations of Chinese citizens standing up to end the persecution in China.

Six days before the show’s debut, scheduled on Jan. 27, Hong Kong’s Immigration Department informed the company that seven production staff would be denied entry, saying they could be replaced by Hong Kong local workers. Later, one of the staff members was granted entry after the presenter made repeated entreaties for a reevaluation.

Kan Hung Cheung, a spokesperson for the organizers, remarked that four of the six production staff played irreplaceable roles in the performance, including lighting, sound effects, technical backdrop. Their roles were specified in the visa application, he said.

“A complete staff is essential to any performing arts group. This is just common sense,” Mr. Cheung said. “It is obvious that the Immigration Department denied their entry because Beijing wants to interfere with the show.”

Hon. Albert Ho Chun-yan, chairman of the Democratic Party (Hong Kong) and legislative council member, condemned Hong Kong authorities for what he believed was their following Beijing’s orders to suppress freedom of expression in Hong Kong. He demanded an explanation for how it would be possible for the show to find replacements in Hong Kong within ten days, but the Immigration Department did not respond.

Some of the council members in different districts of Hong Kong have already bought Shen Yun tickets and were looking forward to the show, they said.

The Democratic Party’s former Sai Kung District council member Lam Wing-Yin said he was concerned over Hong Kong’s independence from China as shown in the apparent political interference in this case.

“China promised that Hong Kong would remain unchanged for 50 years,” he said, referring to the 1997 pact between Britain and China when Hong Kong was returned to Chinese rule, which stipulated that Hong Kong would remain under the British system of governance for 50 years. “Nothing in our life here should have changed, including our freedom, culture and art,” Lam said. “Exactly because of this we can demonstrate that China is making progress and opening up, and Hong Kong can continue to be a unique place in the world.

“But unfortunately over the past decade or so, Hong Kong has suffered too much suppression on political, cultural, and media issues,” he said. “All these will eventually make Hong Kong deteriorate to become one of China’s regular cities.” He said that Hong Kong people expect China to show progress through preserving Hong Kong’s democracy, freedom and human rights.

Well-known senior journalist Ching Cheong said the Hong Kong government’s actions were unfortunate. “Hong Kong has been a place where legal entrance and exits are protected, and we Hong Kong people should cherish such freedom,” said Ching, who was jailed for over three years in China for “revealing state secrets” to Taiwan. “I do not want to see such freedom being interfered with by political forces,” he said.