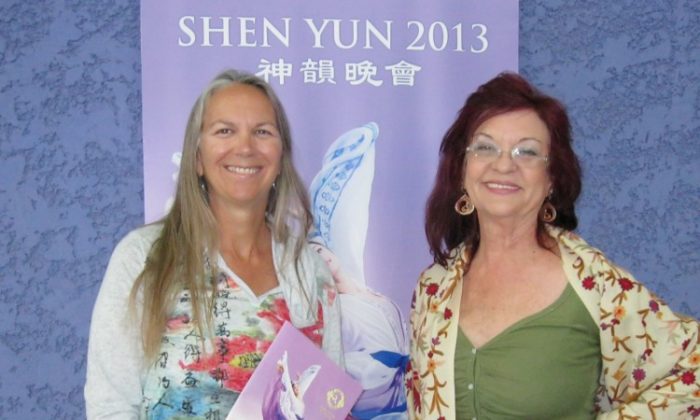 “It’s like how I imagine going to heaven would be,” she said.

The Sunday performance was taken in by a full house and and ended with a standing ovation.

Ms. Jack has been a designer of fine jewelry for over 40 years and her shop was voted one of America’s Top 5 Cool Jewelry Stores by Instore Magazine! She attended with her friend Jeanne Miller, a former kindergarten teacher.

“I was awestruck,” said Ms. Miller.

Based in New York, Shen Yun was formed in 2006 to “to reclaim and renew the true, divinely-inspired cultural heritage of China,” according to the Shen Yun program. The Chinese culture, spanning back 5,000 years, is replete with legends and stories, as well as values such as benevolence, wisdom, and sincerity.

Being a designer of fine jewelry, Ms. Jack is very familiar with beauty. She said she loved the artistry in the performance, including some of the headresses. “The colors were wonderful,” she said. “I just really enjoyed all of the colors going together.”

Ms. Miller’s said she had never used the word “awestruck” to describe her feeling after experiencing something: “I was just amazed!”

Shen Yun’s website explains that there is more to Shen Yun than what is on the surface: “Sophisticated dance techniques, an orchestra joining instruments East and West, beautiful costumes,and a stunning backdrop—this is Shen Yun at first glance. But digging deeper one discovers a sea of traditional Chinese culture.”

Among the effects on stage are mortals and divine being merging as one, according to the company.

Ms. Miller said the beauty of the dancers and the flowing costumes caught her attention, and the music and the other artistic elements also contributed to her feeling in awe.

She further described the performance as bringing her a special feeling.

“It really touched me, spoke to me,” she said. “It was uplifting. I felt lighter.”

The Shen Yun production is enhanced by the use of an animated digital backdrop, which brings alive a transition of characters coming from the heavens and seemingly stepping onto the stage, as well as providing a magical environment which draws the audience into mystical realms with the performers.

“The backdrops are magical windows to completely different realms,” states Shen Yun’s website. “From vast open grasslands in one dance to the stately elegance of Tang Dynasty pavilions in another; from dusty yellow battlegrounds to tropical beaches to Himalayan peaks to picturesque scenery of the Yellow River Delta—the digital projection infinitely expands and transforms the stage.

The backdrop was a lovely surprise to Ms. Jack. She said she loved how the characters on screen and the dancers interacted with each other.

“I love how they mixed the modern technology with ancient traditional dance,” Ms. Miller added.