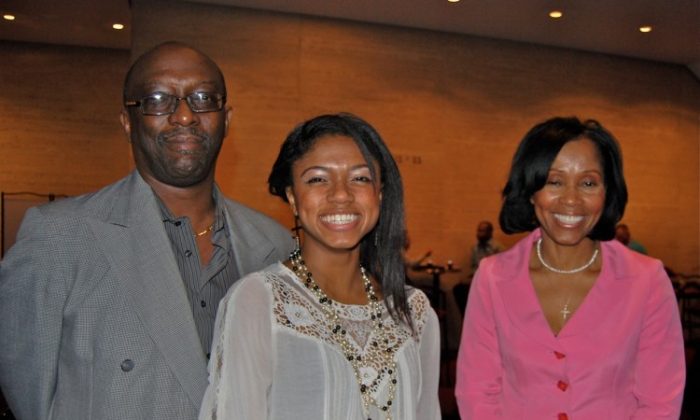 HOUSTON—Shen Yun Performing Arts’ Saturday matinee was met with cheers and great laughter as dancers portraying the mischievous Shaolin monks, the Monkey King, and other beloved characters tumbled across the stage on Dec. 29.

For Ian Wilson, an asset manager, who attended the matinee at the Jones Hall for Performance with his son Adam, the presentation of the issues in China today in addition to China’s history was a nice surprise.

“There’s the imagery,” Mr. Adam Wilson said of the production’s artistry, “but there’s something under it as well.”

Based in New York, Shen Yun’s mission is to revive 5,000 years of Chinese culture through traditional art forms like classical Chinese dance, which is imbued with traditional Chinese values down to the last detail. Unfortunately, the emcee tells the audience, a show like this—carrying values such as respect for heavens, and wisdom and propriety—is not able to be performed in China today.

“We certainly like how the creating of civilization came from China,” said Mr. Ian Wilson, who spent 12 years in Singapore before recently moving to the United States. “It’s the ancient language—it’s a fascinating culture.”

“It’s so diverse as well,” said Mr. Adam Wilson. “So many dialects, so much culture, there’s so much going on there.”

In addition to classical Chinese dance, the Shen Yun International Company dancers perform ethnic and folk dances from many of the 55 minority ethnicities in China, according to the company’s website.

“Other than complete training in the fundamentals, it also entails systematic training in movements and postures, as well as very difficult jumping and tumbling techniques. And so, alongside ballet, classical Chinese dance is one of the most comprehensive dance systems in the world,” notes Shen Yun’s website.

Also in the audience was Biron Wilfred, a pilot, who said watching the dancers made him feel young again.

“A youthful feeling, feeling of life,” Mr. Wilfred said. “A real culture enhancement, that is my feel about it.”

Mr. Wilfred said the dancers were so skilled it was “like they are flowing on air.”

Furthermore, the dancers inspired him.

“They make me feel that at least that they can come here and perform their passion. They do their dance that they love—if they didn’t love it they wouldn’t be doing it,” Mr. Wilfred said. “They enjoy the freedom of doing it, and the freedom here we have to worship, and dance and express ourselves. Around the world we don’t find it anywhere else.”