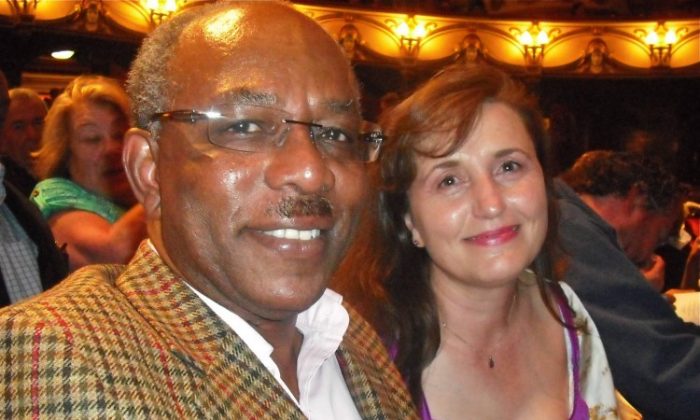 LONDON—Shen Yun Performing Arts graced the stage at the London Coliseum on Saturday, showcasing one of the most ancient cultures in the world.

“All the dancers are fabulous,” said Jeffrey Efeyini, non-executive director of Zenith Bank Plc. “This is first class.”

A state-of-of-the-art digital backdrop behind the dancers towers above them, showing different scenes from throughout the vast land of China, such as the Mongolian grasslands or the soaring mountains of Tibet.

“You see the amount of technology in this screen,” said Mr. Efeyini, referring to how the backdrop sometimes becomes interactive, with animated characters coming down towards the stage and then dancers appearing on stage in a seamless transition.

New York-based Shen Yun travels around the world reviving the 5,000-year-old, divinely-inspired Chinese culture, harmonising different artistic methods to display a culture that was all-but-destroyed by communist rule in China. Imbued in traditional Chinese culture are virtues such as honour, benevolence, sincerity, and a respect for the heavens and the divine.

“It’s very traditional, it goes right into the heart of the people, the way they feel,” said Mr. Efeyini. He felt that the spiritual essence of the culture displayed through the performance and the emotions in the dance steps was very moving. He also felt that it is important for China to stay connected to its traditional culture.

“It is outside of China that Shen Yun’s artistic creators have the ability to freely express themselves and their ancient culture,” says Shen Yun’s website. “Their courage to speak up is an integral part of Shen Yun’s spirit.”

Mr. Efeyini and his wife, Yordanka, a fashion designer of bespoke clothing, have travelled to Beijing and Shanghai.

“We wish you could see something like this in Beijing or in Shanghai,” said Mr. Efeyini.

Shen Yun travels with its own orchestra, which melds classical Western instruments with classical Chinese instruments, such as the 4,000-year-old erhu, also known as the two-stringed Chinese violin, according to the company.

“Love it!” said Mr. Efeyini. “With all the percussions and all the instruments it’s beautiful, very nice.”

In the end, the traditions shown by Shen Yun apply to everyone, said Mr. Efeyini.

“Tradition is with us all the time, whereas organisation comes and goes,” he ruminated. “We are all creations of society and culture, and we have to maintain it inside us.”