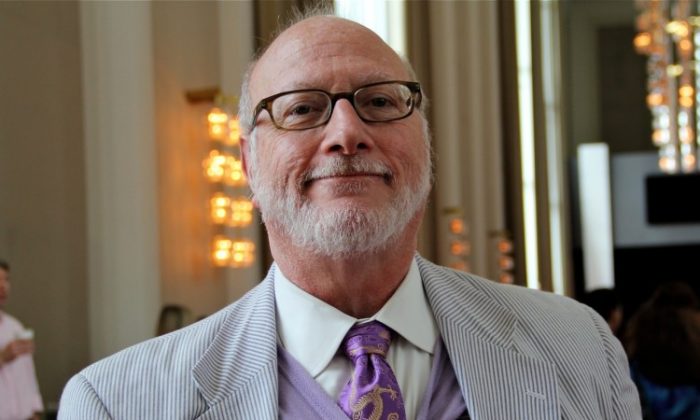 WASHINGTON—Robert A. Spiegel, an immigration lawyer and an ethnologist, was able to attend the Sunday matinee session of the Shen Yun Performing Arts at the Kennedy Center on April 1. It was the last day of the 2012 season and it was a full house with an enthusiastic audience.

Mr. Spiegel had represented students seeking asylum in America following the Tiananmen Square massacre which had occurred in China in 1989, and had a particular affinity for things Chinese. He was attending Shen Yun because it was his birthday and he was wearing a tie with the water dragon on it, the water dragon is his sign according to Chinese astrology. He is also intending to redecorate his apartment with a Chinese theme and was particularly interested to see Shen Yun’s presentation of traditional Chinese culture.

“The settings were beautiful,” he said, noting Shen Yun’s animated backdrops. “I liked the way they had figures in the backdrop and then the dancers would emerge or go back into the scenery.”

He enjoyed the historical aspects of the performance and was glad to see the contemporary scenes addressing present-day concerns that will become important parts of China’s history too.

“They addressed the Falun Gong issue which I thought was terrific,” he said.

Shen Yun is dedicated to restoring Chinese culture and presents through classical Chinese dance, live music and singing, short stories, depicting China’s history, myths and beliefs. Contemporary scenes include Falun Gong practitioners standing up for their beliefs, heavenly beings eventually intervening to drive the oppressors away and restore the balance.

“I would say this, these people cannot go back to mainland China,” Mr. Spiegel rightly predicted of Shen Yun’s performers, although many are hopeful that will eventually happen.

Mr. Spiegel was glad he was able to see Shen Yun, describing the performance as “extraordinary, sensational, super.”