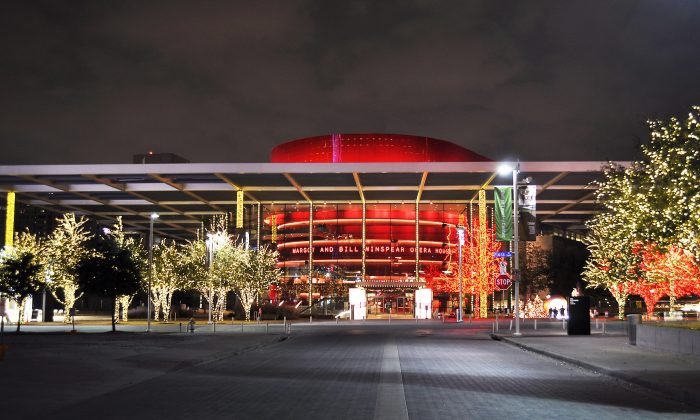 DALLAS—Every year, Dallas hosts a limited run of Shen Yun Performing Arts performances, sometimes as short as two performances. Sally Harris had waited years and years to see New York-based Shen Yun, and with this year’s 10-performance run finally had the chance at the Winspear Opera House on Jan. 1 with her family.

“Outstanding, stunning, stunning,” Mrs. Harris said upon descending from the theater’s steps to exit. “I hope I get the chance to see it again.”

Mrs. Harris, who works in the antiques business, saw the performance opening night with her son Edwin Harris and his wife, and granddaughter Anjel Harris. The family spoke of a powerful experience through the performing arts.

“I think it provided stimulation and incredible creativity in telling the stories,” Mrs. Harris said. “They provided you with a visual message of what it is they were telling in the story. The precision and the joy, the joy they had in telling the story, it just came through. It was so joyful, it was wonderful.”

The story Shen Yun told was one of the divinely inspired culture of China, a culture that has been continuous for 5,000 years. As Shen Yun explains, the traditional culture is one built on values and principles from Buddhism, Confucianism, and Taoism, and thus is  deeply reverent of the divine.

Mr. Harris, a math teacher, said all aspects of the performance exceeded his expectations, were outstanding, and that he “was just blown away.”

As a practitioner of Buddhism himself, he recognized the tenets in the performance, in the stories, songs, and dances.

“I felt good about the stories and the interpretation … about compassion and the Buddhist tenets of openmindedness and understanding and living in the moment, living your life every second, every second is nirvana, every moment. We have the power to create that, in ourselves,” Mr. Harris said.

An image that stuck with Mr. Harris as he described the performance was one of sunshine; the light illuminating divine figures in some of the stories. Remembering it, he felt it was “joyous, exhilerating, very uplifting … I felt that was really powerful.”

Ms. Anjel Harris, a financial coaching program volunteer coordinator at United Way of Tarrant County, said she loved the performance because of its strong and positive themes.

“Every performance had its own message that was so clear and easy to understand. It was just bright and uplifting,” Ms. Harris said.

It was a message of triumph, she said. Woven throughout the performance, she saw stories with characters facing their personal struggles, but overcoming their obstacles and tribulations in victory as they held fast in their beliefs.

“The idea of compassion … the idea that if you do the right thing and stick to your beliefs, and just do what you believe in, you will be triumphant in the end,” Ms. Harris said. “I love the message, just the positivity. It just radiated from the whole performance.”