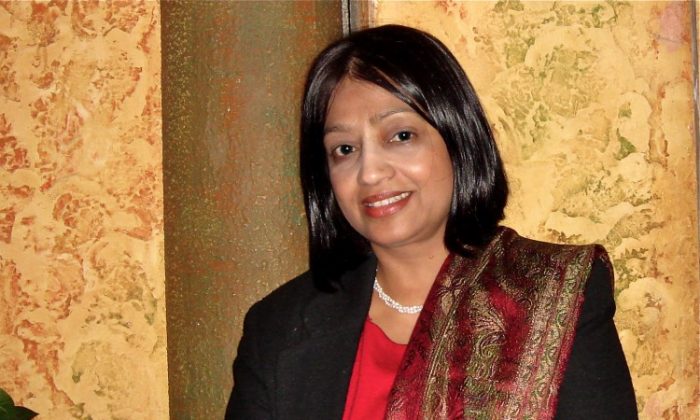 Dr. Chavan is a senior lecturer in Organisational and Management Studies at Macquarie University. Her research focuses on International Business Strategy, Cross Cultural Management and Entrepreneurship, and she has been published in several academic journals and received several awards for her diverse research papers.

Dr. Chavan said the performance was “very, very exhilarating,” adding that “the colours are vibrant … and a combination of dance drama and music is very good.”

New York-based Shen Yun Performing Arts presents classical Chinese dance and music and has as its mission the revival of China’s divinely inspired, 5,00-year-old culture. Since its creation in 2006, Shen Yun has grown to three performance companies and orchestras that tour around the world simultaneously, and counts many winners of international dance and vocal competitions among its artists, according to the company’s website.

The story-based dance How the Monkey King came to be struck a chord with Dr. Chavan. “It is basically a story which was told from ancient times, which I relate to,” she said.

The Monkey King is the central character in China’s classic novel Journey to the West. Born out of a rock, the Monkey King has magical powers that allow him to travel freely between Heaven and Earth.

Dr. Chavan was intrigued by the piece The Choice which depicts suppression of belief in modern-day China where Falun Dafa practitioners are persecuted for their belief. “It’s a bit of information I didn’t have much knowledge about,” she said.

Falun Dafa is a traditional Chinese exercise and meditation practice that was outlawed in China in 1999. The dance shows practitioners peacefully protesting on Tiananmen Square when they are seized upon by the police and brutally beaten. A practitioner’s friend is a police officer. He has to make a choice to either forgo his official duty or protect his friend and the Falun Dafa followers.

Dr. Chavan said it is most heart catching to see that ordinary people find it difficult “to live their normal lives and engage in their spiritual activities when they want to.”The digital backdrops impressed Dr. Chavan. “I was amazed by the combination of technology, art and spirituality,” she said.

Shen Yun’s digital-backdrop team creates vividly animated settings, extending the stage and transporting the audience to a world where heaven and earth are one, states the website.

Dr. Chavan was also impressed by the professionalism of the artists and the long hours of hard work that it must have required to produce the show.

The Shen Yun Orchestra with its combination of classical Western and Chinese instruments often surprises audience members, not expecting to see a full orchestra on tour.

“I thought it was recorded, but I was surprised to see that they were right down there performing,” she said.

The ability to seamlessly blend the two sounds of East and West to create one fresh harmonious sound is what makes the Shen Yun Performing Arts Orchestra unique, according to the website.

Dr. Chavan concluded that she felt exhilarated, inspired with a spiritual feeling, a combination of the three and she would absolutely recommend it to her friends and colleagues to see something “that is so unique.”