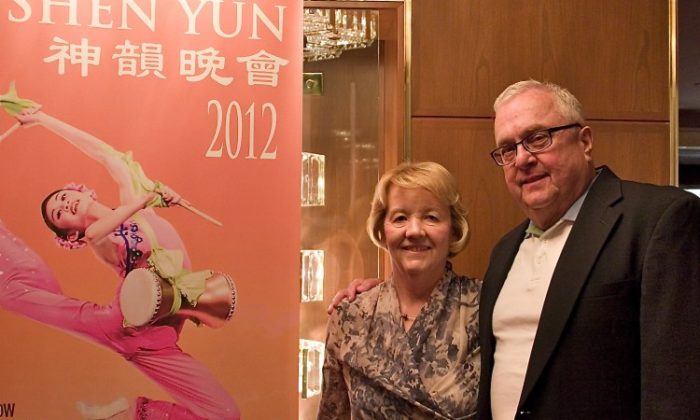 Jene Tonkinson, a retired technical writer for IBM, called the performance “grand” and lauded its extensive use of colors. After attending the performance with his wife, he said the interplay between the performers and Shen Yun’s digital backdrop “was very fascinating.”

Moving scenery is imposed on the backdrop for each piece in the performance. The backdrop shows brightly colored scenes from ancient China, pastoral landscapes, mountaintops, and others.

“The beautiful colors of those garments that the dancers were wearing … was just gorgeous,” he added. “It was exhilarating; it really was.”

Shen Yun uses a wide variety of costuming that are all hand-made and are inspired from China’s various dynasties and ethnic groups, the company’s website says.

“I think the color of those gowns … stood out [for] me, and the motion” of the dancers definitely caught his eye, Mr. Tonkinson said, and added that the dance is “nothing I’ve ever experienced before.”

While colorful backdrops and costumes are a staple of Shen Yun, the dance company’s main attraction is classical Chinese dance—a system the company says is among the most comprehensive in the world.

The company draws much of its inspiration from the 5,000-year-old culture of China and shows its legends and stories, the website states.

However, much of China’s traditional culture and arts were nearly destroyed under six decades of communist rule, particularly during the Cultural Revolution, which ended in 1976, according to the company’s website.

“I got that the Chinese culture is beautiful, it really is, and … it’s a shame it’s being suppressed,” Mr. Tonkinson added.

The performance also includes an orchestra that joins together Western and Chinese musical traditions, the company says.

“It was an exhilarating evening. I was tired when I got here because [he and his wife] were working in the garden all day, but I feel great now,” Mr. Tonkinson said.