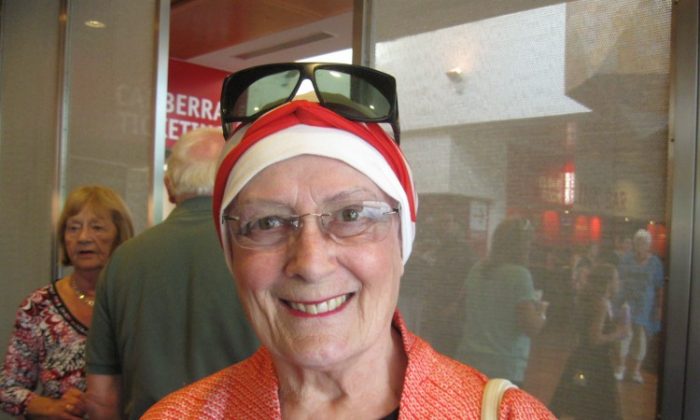 CANBERRA, Australia—Shen Yun Performing Arts was warmly received by all at the Canberra Theatre on Sunday, Feb. 17, during the final Australian show of its world tour.

Even cancer treatment couldn’t hide the sparkle in 74-year-old Mindy Sutherland’s eyes as she spoke of her pleasure at seeing the New York-based dance company.

“It was exhilarating, very energetic,” Mrs. Sutherland said. “I love the grace, the grace of all the dancers—the male and the female—they are all so graceful and very athletic as well.”

She said she used to do ballet when young and could even put her feet behind her head, but she was truly impressed by what these young people could do.

“It was lively, really lively, fast, and the music, the tempo of the music, everything about it was go go go go!”

The ornately decorated costumes, hand-made from delicate fabrics with amazing colors, were a joy for Mrs. Sutherland.

“The costumes were brilliant, just the blaze of colour, I couldn’t believe the number of costume changes actually. It was amazing how many different costumes we saw in such a short period of time,” she said.

Shen Yun’s mission is to revive China’s divinely inspired culture. Mrs. Sutherland felt that she had seen the divine onstage, and that it reminded her of the return of Jesus.

Mrs. Sutherland is the widow of a decorated Vietnam Veteran who received the Distinguished Conduct Medal. She came to Canberra with her husband to the Royal Military Academy Duntroon. She has lived in Canberra ever since.