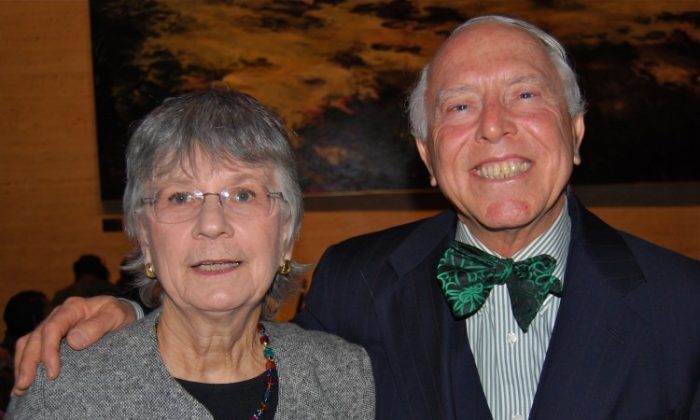 Shen Yun ‘Excellent in every way’

HOUSTON—Drs. Bernard and Ethel Patten have always felt drawn to China, and when they saw advertisements for Shen Yun Performing Arts, they decided it was a must-see.

“Excellent in every way,” said Mr. Patten of the Shen Yun matinee performance at the Jones Hall for Performing Arts in Houston on Dec. 30. “Wonderful! The colors, the costumes, the set, the singing, the dancing, fantastic!” said Mrs. Patten. The couple have both had long careers in medicine, and have been interested in Chinese culture for nearly as long.

Mrs. Patten, a hematologist, is the former director of the University of Texas Medical Branch Blood Center and former president of the South Central Association of Blood Banks.

Mr. Patten has over 40 years of experience teaching in prestigious medical institutions, and was part of the team that discovered the L-DOPA treatment for Parkinson’s disease, which he recently wrote his second book on.

His study of Chinese culture has been extensive as well.

“I studied Chinese art for 22 years,” said Mr. Patten. “I took about 55 courses in calligraphy,” he added. He was impressed with the 5,000 years of Chinese civilization covered in Shen Yun’s performance.

The New York-based company’s mission is to revive Chinese culture through traditional Chinese art forms, according to its website, including classical Chinese dance.

“Classical Chinese dance has a long history of thousands of years, passed down continuously within the imperial palace and ancient Chinese theater and opera,” the website states. “Soaking up profound wisdom from every era and dynasty, it has become a complete system of dance embodying traditional aesthetic principles with its unique dance movements, rhythms, and inner meaning.”

Shen Yun performs mostly classical Chinese dance, with ethnic and folk dances, and stories throughout the ages. With an animated digital backdrop displaying scenery from a celestial palace on the moon to the clear skies and green grasslands of Mongolia, Shen Yun brings forward China’s diversity.

“You felt as if you were visiting the country, because you would see the particular scenery of the area,” said Mrs. Patten.

“I like the fields, the way the flags were waving in the background, and the trees,” Mr. Patten agreed. “It looked artificial but real at the same time.”

Mr. Patten added that he was impressed by the solo vocalists singing in the bel canto style, with Chinese and English lyrics projected simultaneously onto the screen.

“They were just absolutely beautiful, and I liked the idea that you could see the Chinese words on the top, with the translations,” Mr. Patten said. “I could count the syllables that they were singing.”