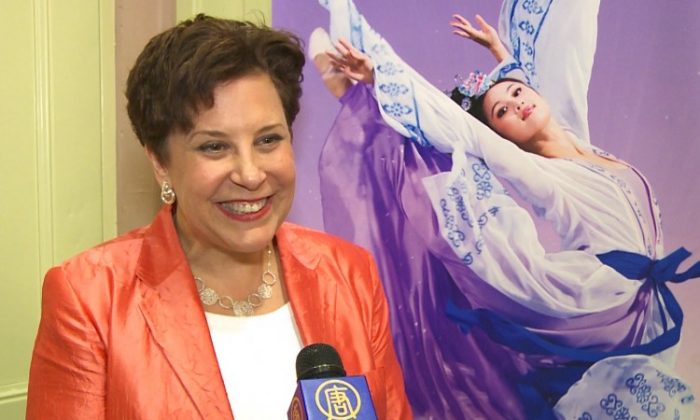 Barbara Rosenau was amazed by Shen Yun Performing Arts at Philadelphia's Merriam Theater in Philadelphia on May 4. (Courtesy of NTD Television)
News

Shen Yun “Exceeded Every Expectation” for Director of Adult Education

PHILADELPHIA—Barbara Rosenau was amazed by the performance of Shen Yun Performing Arts at the Merriam Theater in Philadelphia on May 4.

“The show was amazing. It exceeded every expectation. The dancing, the precision, the costumes, the scenery, the wonderful way they blended the animation with the reality of the people,” said Ms. Rosenau.

Shen Yun is based in New York and tours the world with a mission to revive China’s 5,000-year-old divinely inspired culture.

“It broadened my horizons. I had no idea about the history of China, about all the dynasties,” said Ms. Rosenau.

Although she knew a little about China’s history, but “didn’t know the depth of it with the emperors, and the fairies, and the Buddha.”

“Through the universal language of music and dance, Shen Yun weaves a wondrous tapestry of heavenly realms, ancient legends, and modern heroic tales, taking you on a journey through 5,000 years of Chinese culture,” according to the company website.

Ms. Rosenau said that she learned a lot about China’s history and felt the show was uplifting.

“It’s telling American audiences that there was 5,000 years of history of Buddha, and spirituality, and religion, and we didn’t know that growing up,” said Ms. Rosenau.

“But also opening up a door of what was really going on with the Chinese people and not just the Chinese government,” she said and also commented on what she said was a strong point at the end about connecting to your roots and history. “That’s very important to me in my life with my roots and my history and my heritage. I related to that on a very human level,” Ms. Rosenau said.