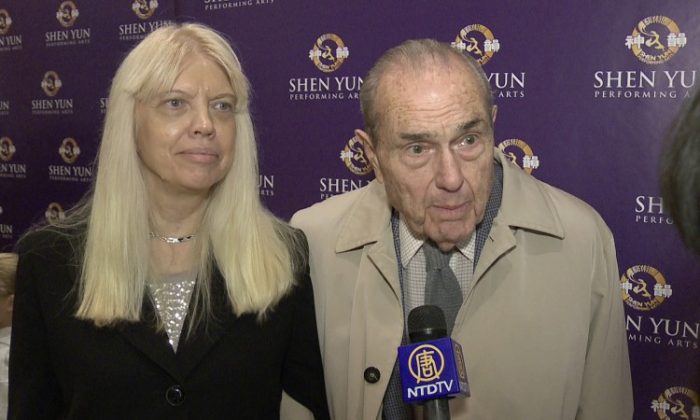 NEW YORK—Authentic Chinese, made in America. This tagline for Shen Yun Performing Arts is an apt depiction of the classical Chinese dance, music, and song presented on stage by the New York-based company.

“Classical Chinese dance is a culture left to us by the ancients who came before us,” says Shen Yun’s website. “Its beauty should be riches shared by all of humanity.”

Chinese people tend to treasure the performance; knowing it is something they cannot experience inside modern-day China. Western audience members feel they have taken a journey into a deep part of history that connects with them on levels sometimes unexplainable.

Mr. Guo, a trade official from China, said Shen Yun was perfect. “I’m very happy in my heart to come and see Shen Yun here today,” he said after watching opening night at Lincoln Center in New York on April 18.

“The music, backgrounds, and especially the traditional, classical Chinese dance in this performance, do not exist in the whole of China. It is not possible to see such genuine, classical and traditional Chinese arts,” he said.

Mr. Guo first came to the United States in February. He was in Miami, missed the performance in Florida, returned to China, waited two months, and flew to New York last week to see Shen Yun.

“This is the first time in my life to see this most beautiful and pure Chinese performance, it has given me some enlightenment and taught me a lot,” he said.

Shen Yun’s mission is to revive the 5,000-year-old, divinely inspired culture of China. Unfortunately, over the past 60 years, this cultural treasure has been persecuted and co-opted by the Chinese Communist Party, says the company’s website. “It is outside of China that Shen Yun’s artistic creators have the ability to freely express themselves and their ancient culture. Their courage to speak up is an integral part of Shen Yun’s spirit.”

Dr. Stanley Cohen has dedicated his life to music and the entertainment and performing arts industries, largely as an educator through his role as president and professor of music at Five Towns College.

“You are speaking to someone who has vast experience in the entertainment industry,” he said.

“There is nothing like this anywhere in the world, it was just a magnificent, marvelous, spectacular experience,” he said. “The coordination and the skill and the professional level was just marvelous. It was just a delight to experience.”

Dr. Cohen was particularly impressed with the 40-member orchestra, which tours with the company.

The Western instruments play the foundation and the Chinese instruments lead the melodies. “The sound produced is uniquely pleasing to the ear,” states the company’s website. “The ensemble at once expresses both the grandeur of a Western orchestra and the distinct sensibilities of China’s 5,000-year-old civilization.”

“The orchestra was magnificent,” Mr. Cohen said. “It was so good that in the beginning I thought it was recorded, but when I went down to the stage to see the size of the orchestra, and the conductor, and the variety of percussion and instruments and the music and coordination between the dancing and the orchestra—it was amazing,” he said. “It was the highest professional level that I have experienced in a long, long time.”

Shen Yun’s award-winning vocalists, use “the highly difficult technical requirements of bel canto operatic singing while retaining the proper Chinese articulation and diction,” according to the company’s website.

Classical singer and composer Jennifer McDonald said she “really appreciated the technique and the beauty of the voices.” She added that she loved the first singer, Pi-ju Huang, who has performed leading roles in operas such as La Traviata, Madame Butterfly, and Don Giovanni.

“It was great because the words were behind, so that you were already tingling from the voices and then you were seeing the words, and it was very, very, very profound,” said Ms. McDonald. “Beautiful!”

The lyrics sung by Shen Yun’s vocalists are all original compositions. “Brimming with philosophical reflection about human life and deep layers of meaning, they traverse the boundaries of nation, race, and culture and have been fondly received and appreciated the world over,” expounds the website.

“It was a really great show. I really enjoyed the variety of the performance—the colors, the costumes, the spirituality was beautiful,” said Ms. McDonald. “It makes you feel very touched inside, the whole show.”

The seven-show run at Lincoln Center’s David H. Koch Theater was met with high praise by audience members from all walks of life.

Shen Yun Performing Arts, based in New York, has three touring companies that perform simultaneously around the world, with a mission to revive traditional Chinese culture. For upcoming performances around the world and more information, visit ShenYunPerformingArts.org.