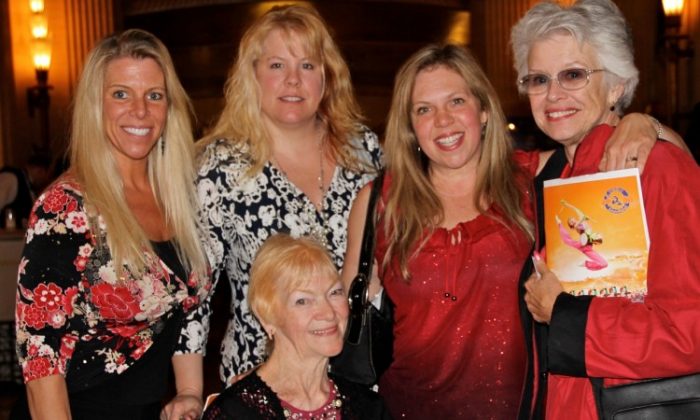 CHICAGO—It was a night out for the female members of the family, when sisters Michelle and Linda Whitney brought their daughters, Michelle’s Sascha Schmidt and Linda’s Kim Jennings and Julia Sandabar, to see Shen Yun Performing Arts at the Civic Opera House in Chicago on Thursday April 19.

In fact the two mothers had driven back from “wintering” in California for three days straight just to be in Chicago in time for the performance.

“It was a wonderful experience and so happy we did it,” said Linda. “I loved the show.”

Shen Yun, a New York-based performance company, was formed in 2006 by a group of expatriate Chinese, keen to restore and perform to Chinese traditional values and culture.

The performances span China’s 5,000-year history from its ancient past and ethnic influences to contemporary scenes facing Chinese people today.

“I didn’t know what to expect,” Linda said, but was heartened to see that young Chinese people were “making a statement.”

“I think that all the young people are going to change everything,” Linda said, adding that she had seen that in Shen Yun. “It really emphasized it,” she said.

Michelle loved Shen Yun too. “It was beautifully done.”

“We came here to experience something different, and we did,” she said.

Michelle said she felt like she had “learned a lot,” from the narrative histories but also from the classical Chinese dance performances.

“I think it was just seeing the traditional moves … some things to me were just obviously not so much choreographed as they had been around forever.”