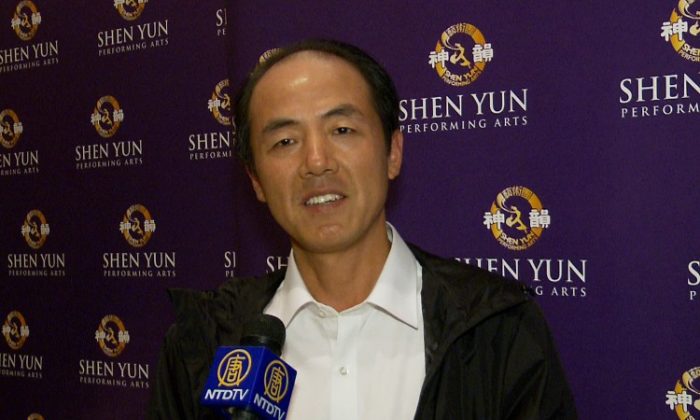 “The performance was fantastic,” said Ai Furong of Shanghai. “It is a traditional and authentic show that preserved the heritage of 5,000 years of Chinese culture. It is very, very good.”

Using this dance system, a digital backdrop, handmade, colorful costumes, and award-winning vocalists, Shen Yun tours the world reviving the 5,000-year-old, divinely-inspired Chinese culture, according to the company’s website. This culture was nearly destroyed by the Chinese communist regime.

“You really can’t see a show like this in China,” pointed out Mr. Ai. Shen Yun is based in New York, which allows it the freedom to express China’s ancient culture free from the oppressive environment within modern China.

Mr. Ai, who has protested in front of the United Nations about forced evictions by the communist regime in China, feels the performance “realistically portrayed the good and evil in China.”

“Whether it’s the forceful evictions or the persecution of Falun Gong practitioners, the experiences are similar,” he said. “We are all oppressed and persecuted by the Chinese communist regime. The show portrayed this very well, you can even say to the ultimate perfection.”

Several dances portray the oppressive environment in modern-day China through the persecution of the spiritual practice Falun Gong—which is guided by the principles of truthfulness, compassion, and tolerance.

“It has helped over a hundred million Chinese people understand and return to the essence of traditional Chinese culture—Confucian, Buddhist, and Taoist schools of thought,” Shen Yun’s website says. Despite persecution since 1999, “Falun Gong practitioners have held firm to their beliefs and have continued to expose countless injustices through peaceful means,” states the website. “Their spirit of compassion and tolerance manifest the very essence of China’s 5,000-year-old divine culture.”

Mr. Ai felt that the Chinese culture seen throughout the evening was great.

“The righteousness and compassion in a person is portrayed to the utmost perfection,” he said. “The performances showed that one should treat others with kindness. Such simple and sincere characters are not reflected in China today.”