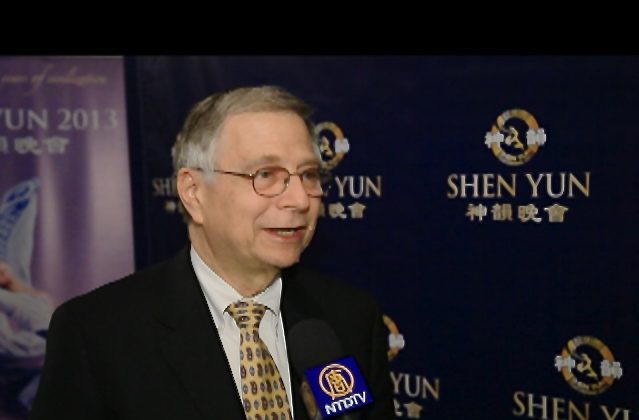 “The choreography was wonderful. The synchronization of how the performers stay within context and unison was unbelievable. The costumes were phenomenal, the colors and brightness,” said Mr. Zuckerman.

“And the media behind it was particularly special, a modern touch to a traditional performance,” he said, referring to Shen Yun’s animated digital backdrops, which create “vividly animated settings, extending the stage and transporting the audience to a world where heaven and earth are one,” according to the Shen Yun website.

Shen Yun is on a worldwide tour reaching 100 cities this season, performing to sold-out venues everywhere.

Ancient Chinese wisdom states that in order to convey true art, one must have inner beauty, and Mr. Zuckerman shares his thoughts on the dancers:

“The performers were the best part of the show, just watching them enjoy what they were doing,” he said.

Shen Yun’s mission is to restore China’s 5,000 years of rich culture lost during the Cultural Revolution due to atheist communist rule through the universal language of the performing arts.

As someone who is familiar with Chinese culture Mr. Zuckerman expounded further, “Seeing the Chinese culture and spirituality from this point of view is very different from what you see in China, because you don’t see that. At least for a tourist or businessman visiting in China it’s very dry. We don’t see the emotions; we see a lack of emotion. Here there was emotion in the music, the performers, the singing; the translations were filled with allegory and symbolism that was just fantastic.”

Mr. Zuckerman recommends everyone see Shen Yun. “Come see it, you will be pleased. It’s worth the time and worth the investment.”