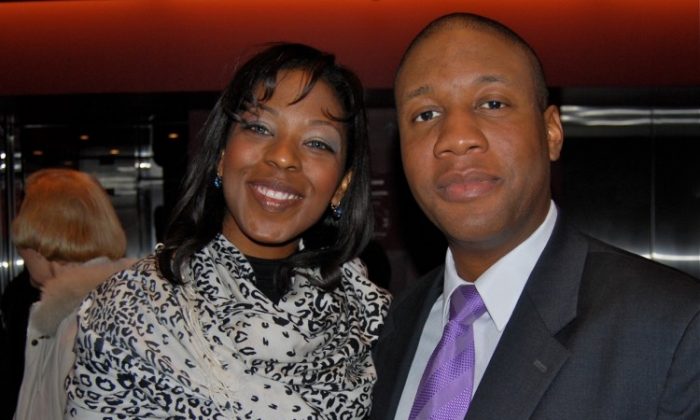 HOUSTON—Shen Yun Performing Arts’ revival of traditional Chinese culture made for a special anniversary gift for Mrs. Julie Lefler on Dec. 29 in Houston at the Jones Hall for Performing Arts.

“I loved it,” Mrs. Lefler said. “The girls looked like butterflies. The girls, for me, represented everything [of the Chinese culture]. Like enlightenment, coming out of nothing.”

The classical Chinese dance performed is accompanied by a live orchestra blending Eastern and Western instruments, and an animated digital backdrop.

“Loved it! It’s so surreal, it makes you feel like you’re part of it,” Mrs. Lefler said of the animated backdrop. The backdrop changes from dance to dance, displaying picturesque scenery from the Han Dynasty palace to snow-capped Himalayas, accompanying the stories that span from China’s origin to China today.

For Mrs. Lefler, the stories about the state of Chinese traditional values under the current regime were an interesting revelation. Unfortunately, the emcees express, Shen Yun is not a show that can be seen in China today.

“You assume that because we have such good relation, it’s very open and allows people to express themselves, but when you show this and you see that’s not the case, it kind of makes you want to be a little more engaged,” Mrs. Lefler said.

Also in the audience was Mrs. Julie Caille, who was blown away by the choreography and shared a similar sentiment.

“My impression was that if they could break free from communism they could just be so happy and full of joy, and full of life, and just, like anyone else, when they’re no longer living under a repressed society,” Mrs. Caille said.

Traditional Chinese values are embedded in the art forms as presented by Shen Yun, including respect for the heavens, divine retribution, benevolence and justice, and wisdom and propriety.

“I felt it was magical because it was just so pretty and also the fact it had a deeper meaning to everything,” said Ms. Shirley Freeman, who also attended the performance. “I think there was a definite spiritual meaning to it.”

“The freedom of movement, the spiritual connotations that underlined everything that we watched, the higher beings, just the beauty of the spirits,” said Mr. Brooks. “It was fabulous.”