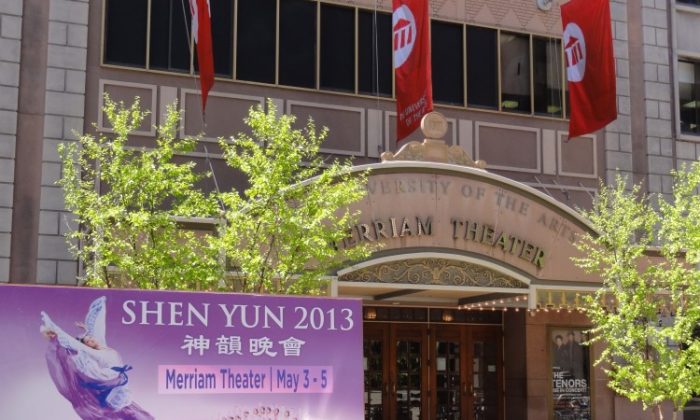 Mirriam Theater at the Kimmel Center for Performing Arts in Philadelphia.
News

PHILADELPHIA—Shen Yun Performing Arts graced the stage at the Merriam Theater on the evening of May 4, enchanting a full house audience with a revival of the oldest culture in the world.

For Ms. West, the dancing in Shen Yun stood out the most.

“The way the women seem to float across the stage is amazing,” she said.

At the heart of a Shen Yun performance is classical Chinese dance, a dance form difficult to master and highly expressive. The company features ethnic dance and story-based dance as well.

Accompanying the dancers, who are adorned with handmade costumes, is a unique orchestra that deftly melds both classical Western and Chinese music.

“The Shen Yun Orchestra combines the spirit, beauty, and distinctiveness of Chinese music with the precision, power, and grandeur of the Western symphony orchestra. The result—two great traditions producing one refreshing sound,” according to Shen Yun’s website.

“The music, the orchestra, is amazing,” she said. The sounds of some of the traditional Chinese instruments, such as the erhu, a 4,000 year-old two-stringed Chinese violin, had never reached the ears of the West family before.

Further, the digital backdrops that are seamlessly integrated into the performance—the dancers appear to emerge from the backdrop or come out of it—pleased Ms. West.

“The jumping off of the stage and into the video is just unique to me, it’s beautiful,” she said.

Mr. West said that he agreed “100 percent” with everything his wife said. “It’s outstanding,” he said. “It’s amazing.”