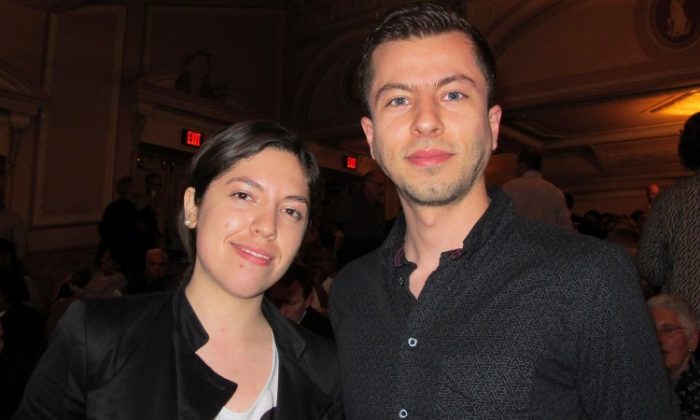 Ana Gamboa and Arturo Varela share their Shen Yun experiences at at the Merriam Theatre on May 9. (Hannah Cai/The Epoch Times)
News

PHILADELPHIA—Shen Yun Performing Arts drew a full-house at the Merriam Theatre on May 9.

“I don’t even know where to begin, there are so many things going on,” he said. “It is really impressive.”

Classical Chinese dance is at the core of a Shen Yun performance.

“Dance is one part of human culture,” states the website of the New York-based company. “Classical Chinese dance is grounded in 5,000 years of divinely inspired culture, and is a dance art form built upon a deep foundation of traditional aesthetics.”

“I was really surprised to see how the dancers, both the female and male dancers, are so strong in their movements, and at the same time so delicate in their own way,” said Mr. Varela.

The dance Sleeves of Silk—which features long, lingering “sleeves of silk,” according to Shen Yun’s program book— entranced the senior reporter. “They are almost hypnotic by the way they float,” he said.

The dancers—adorned with colorful, handcrafted costumes—are accompanied by digital backdrops, award-winning vocalists, and an orchestra that melds classical Western and traditional Chinese instruments, according to its website.

“A performance by Shen Yun is a presentation of traditional Chinese culture as it once was: a study in grace, wisdom, and the virtues distilled from the five millennia of Chinese civilization,” explains the website.

Mr. Varela saw “a great balance” in the performance, adding that each dance “is so different from the next one.”

“It really feels like a condensed or intensive appreciation of Chinese culture,” he said. “It is an amazing show and I would recommend it to anybody.”

Ana Gamboa, a reporter and blogger for AIDia NewsMedia, accompanied Mr. Varela to the performance.

“It is a very beautiful experience and it is a show that everybody can enjoy no matter where they are from,” she said.

Shen Yun presents a “good opportunity to get to know the Chinese culture and its “roots and origins … and how spiritual they are,” Ms. Gamboa said. “The art is beautiful.”