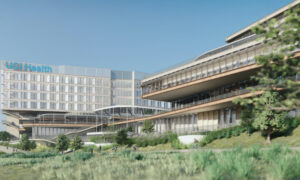 CHICAGO—”I thought it would be unusual , and it certainly is,” said Bill Bailes at intermission of the Shen Yun Performing Arts New York Company’s performance at Chicago’s Cadillac Palace on May 10.

“Unusual, I didn’t know what to expect,” said the housewares importer. “I haven’t seen anything like it before. We have enjoyed it so far and look forward to the next act.”

“I enjoyed the girls with the multi-colored skirts. It made beautiful visuals,” Mr. Bailes said.

The hallmark of Shen Yun is classical Chinese dance with its distinctive and compete dance system of “postures, leaps, flips, spins and other difficult tumbling techniques.”

Also unique to the company is its use of costumes and simple props, such as handkerchiefs twirling in the air to create the effect of flowers.

“I know that it is an ancient culture, and it is certainly interesting to watch how they perform, and all of wonderful, beautiful movements that they make.”