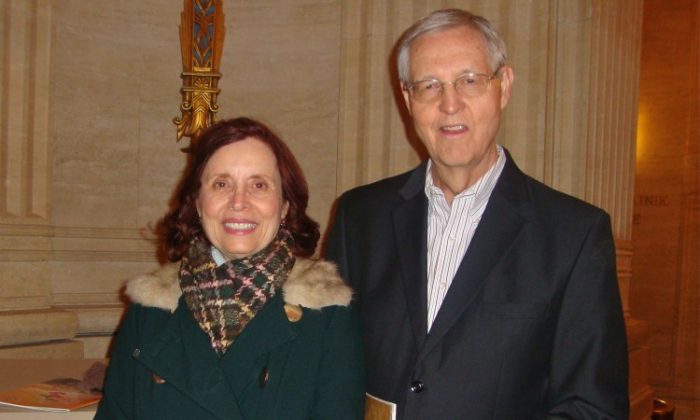 CHICAGO—Robert Chatterton, professor of obstetrics in the Feinberg School of Medicine at Northwestern University, and his wife Carol, saw Shen Yun Performing Arts at the Civic Opera House in Chicago.

“We enjoyed it very much. It’s wonderful and the sets were so beautiful,” he said. “The dancing was just wonderful to see.”

Shen Yun, a New York-based company, has its mission to restore China’s 5,000-year-old culture, which has been all but wiped out after 60 years of communist rule.

Classical Chinese dance is an integral part of that “divinely inspired culture,” the Shen Yun website says describing it as “a dance art form built upon a deep foundation of traditional aesthetics” and “rich with expressive power.”

Professor Chatterton particularly liked the dance, Snowflakes Welcoming Spring, which portrays the beginning of spring through a delightful handkerchief dance.

“It is so beautiful, the way they twirled the cloth. It was just beautiful,” he said.

“We really enjoyed it. It was just so beautiful,” she said, adding “I just loved the women—they are so elegant.”

A former vocalist and ballet dancer, Mrs. Chatterton elaborated further, “The way they danced, so graceful and light on their feet. And the men are wonderful acrobats,” she said.

According to the Shen Yun website, classical Chinese dancers must focus on three fundamentals: bearing, form, and technical skill. It says, “Other than complete training in the fundamentals, it also entails systematic training in movements and postures, as well as very difficult jumping and tumbling techniques.”

Mrs. Chatterton’s experience as a dancer gave her insight into the skill required to achieve a performance of the caliber of Shen Yun: “These people are trained beautifully,” she said, “I really appreciated it.”