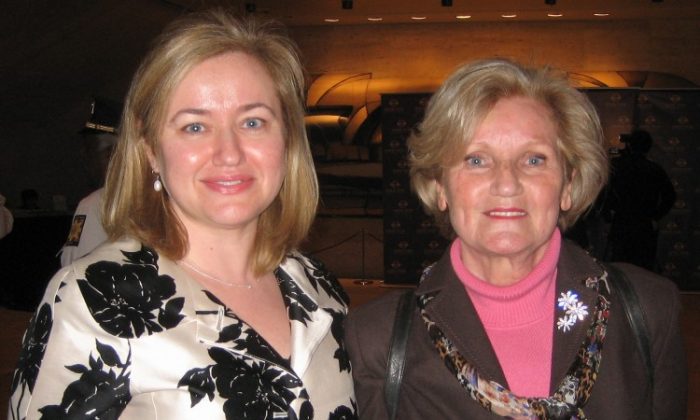 NEW YORK—Shen Yun Performing Arts ended its second show to roaring applause and a standing ovation that lasted through a curtain call on Thursday night. This has been the common reception for the performance at Lincoln Center’s David H. Koch Theater, which held five sold-out shows in January.

Shen Yun Performing Arts has set out to revive China’s 5,000 years of divinely inspired culture through dance and music inspired by China’s many dynasties and unique ethnic groups.

“It was a beautiful show,” said Maribel Becker, senior director of ad operations at MTV Networks. “I thought it was a great collection of different dances and songs.”

The full orchestra combines a Western philharmonic orchestra, which plays the foundation, while traditional Chinese instruments lead the melodies.

Shen Yun is a unique performance. Reviving the essence of traditional Chinese culture means reviving a heritage rooted in values like propriety and justice, reverence for the divine, and filial piety.
“Unfortunately, over the past 60 years, this cultural treasure has been persecuted and co-opted by the Chinese Communist Party,” the Shen Yun website said. “It is outside of China that Shen Yun’s artistic creators have the ability to freely express themselves and their ancient culture.”

Classical Chinese dance is also a rare treat. It not only has a deep expressive quality, but also a broad set of movements from subtle hand gestures to soaring flips.

“Classical Chinese dance is a culture left to us by the ancients who came before us,” says Shen Yun’s website. “Its beauty should be riches shared by all of humanity.”

To keep things accessible, between each dance and song, masters of ceremony give background in both English and Chinese—which Ms. Becker said she found enjoyable.

“It was so lovely to see the dances and hear the songs, and have the explanation of what the story was about and the origin of the story,” she said. “I loved it. It was so beautiful.”

Ms. Becker brought her mother, Marliese Becker, a retired pattern maker, to see the performance as a treat. The senior Becker shared her daughter’s enthusiasm, particularly with the costuming.
“They are just phenomenal costumes, and the stage work, of course, was just very technical with the most modern techniques you can think of, “she said. “It was very artistic.”

The technical stage work Marliese Becker referred to was the digital backdrop, which the performers uniquely integrate into the show. Using hi-tech animation, they create the illusion that characters are moving in and out of the background.

The backdrop also takes the audience from the beginning of Chinese culture to modern day China; from battlegrounds to the heavens; from secluded monasteries to flowering gardens.

“I just love it,” Marliese Becker said, noting “I have loved Chinese culture for many years.”

She referenced the Chinese quality of finding deeper meaning in life and nature, and said she saw this quality in the different themes of each song and dance. “I find this just fascinating,” she said.