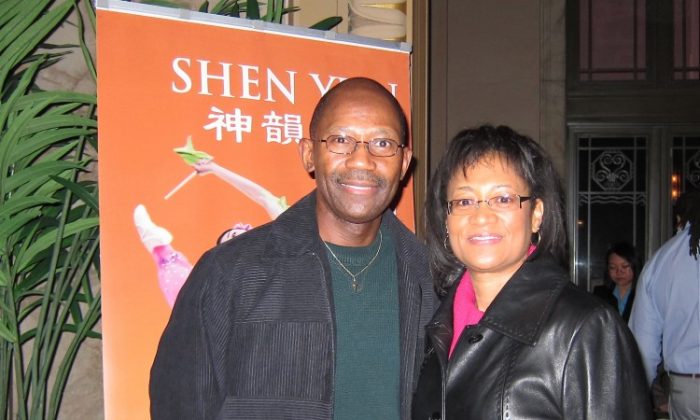 Shen Yun Brings Kinship and Oneness to all Mankind

Sylvania McDaniel and fiancé Tina Brooks were among the audience at Shen Yun’s first of three shows in St. Louis.

Mr. McDaniel is a supply chain supervisor for Amberin Missouri, a utility company, and the associate minister at First Baptist Church of Chesterfield.

“It was excellent,” Mr. McDaniel said of the performance. “It had very much a spiritual context to it. It allows you to see that in all cultures, there is a sense of the Divine, there is a sense that in the midst of the good, the bad and the ugly that love ultimately triumphs over all.

“[It] definitely allowed you to see into a culture that maybe you had misunderstandings about, and brought a closer sense of kinship and oneness to all of mankind,” he added.

New York-based Shen Yun travels around the globe with one mission— “to revive the 5,000 year old, divinely inspired culture of China,” says its website. “After more than 60 years of Communist rule in China, and especially after the Cultural Revolution, Chinese traditional culture has been all but completely demolished. However, the deeper spiritual core of the ancient culture, with its values of benevolence, honor, propriety, wisdom, and sincerity, as well as a reverence for the gods and the heavens, cannot be destroyed.”

“I think you can recommend it to all people,” Mr. McDaniel said. “We all share a kinship when it comes to the focus of love, wanting to overcome evil in the world and want to have a sense of brotherhood amongst all mankind.”

Mr. McDaniel pointed out: “If our government officials, congress, our senators, if they could see this show, maybe it will set a course for the next four years to be more unity, more harmony, more productivity.”

Ms. Brooks commented that she believes the performance is very enlightening of the Chinese culture. She said: “I thought that everything was just so beautiful, the music, the artistic part of it, the costumes. … the story that it told about the forces of good and evil and how good always prevails. It was very enlightening.”

Classical Chinese dance, with a long history of thousands of years, requires “complete training in the fundamentals,” explains Shen Yun’s website. “It also entails systematic training in movements and postures, as well as very difficult jumping and tumbling techniques,” making it “one of the most comprehensive dance systems in the world.”

Accompanying the dancers is a digital backdrop, colorful, handcrafted costumes, and an orchestra that blends classical Western instruments with ancient Chinese instruments, such as the 4,000 year-old erhu, or two-stringed Chinese violin.

Ms. Brooks saw the harmonizing aspect of the show affect many of the audience members, as well as herself. “I was telling my fiancé how it was very relaxing to me,” she said. “Just from the colors, to the music, to the atmosphere. … It was very relaxing.”