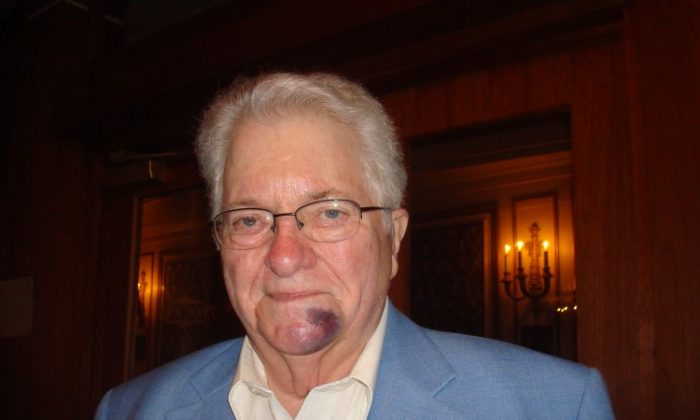 After looking forward to the show for several months and finally seeing the performance at the Proctors Theatre on Thursday night, Mr. Covel said Shen Yun was “absolutely fascinating.”

“The choreography is unbelievable, costuming is beautiful, women are beautiful,” he said.

Based in New York, Shen Yun presents classical Chinese dance and music around the world. The mission of the performing arts company is to revive China’s 5,000-year-old divinely inspired culture.

“Through the universal language of music and dance, Shen Yun weaves a wondrous tapestry of heavenly realms, ancient legends, and modern heroic tales, taking you on a journey through 5,000 years of Chinese culture,” states the Shen Yun website.

Mr. Covel enjoyed the story-based dances and said it was easy to follow the themes being depicted.

“The story they tell is so obvious through the choreography,” he said.

Also at the performance on Thursday evening was Tony Jones.

“I thought the show was artistic, a lot of talent, very colorful,” he said, while also praising the music presented by Shen Yun.

Mr. Jones, who owned an accounting business before retiring, said the performance made audience members feel relaxed and free.

“It made you feel like freedom … it was nice, very enjoyable. There was nothing tense about it.”

Shen Yun Performing Arts’s last scheduled performances for this season are in Chicago on May 10-12 and Syracuse, May 12.