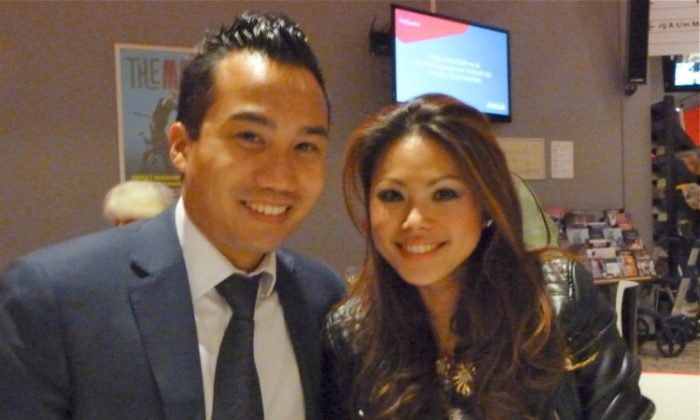 Edwin Simon and his wife Maggie Simon-Tjoeng during intermission at the Shen Yun performance at the Lucent Danstheater in The Hague, on March 13. (Jasper Fakkert/The Epoch Times)
News

Shen Yun a ‘Travel back through time’ Says Portfolio Manager

THE HAGUE, The Netherlands—Edwin Simon described the Shen Yun Performing Arts performance in The Hague’s Lucent Danstheater on March 13 as a “travel to the real values inside yourself” and his wife, Maggie Simon-Tjoeng, was “speechless” about the attention to detail, especially in the costumes.

Edwin Simon, a portfolio manager at BNP Paribas Investment Partners in Amsterdam, was recommended to see the show by a colleague. Mr. Simon got inspired and attended the performance with his wife, who works as a make-up artist for Estee Lauder, and they were glad they came. “It’s a very good show. It’s a travel back through time and it gives you a good feeling about the real Chinese values,” Mr. Simon said.

Shen Yun Performing Arts is based in New York and is renowned for being the world’s premier classical Chinese dance and music company. It currently has three companies touring the world and the Shen Yun International Company will visit seven cities in Europe during the next few months.

Even as a relatively young company—Shen Yun was established in 2006 with the mission to revive the 5,000 years of Chinese culture—the show has already won the highest critical acclaim and expanded its world tour to nearly 100 cities in 2012. The performance includes dance, a live orchestra, a digital backdrop and detailed costumes to provide the audience with a complete impression of Chinese culture.

Having attended the The Hague performance, Mr. Simon was quite enthralled and it took him a while to come up with a fitting word to describe the performance. He said: “It’s difficult. I think in the end it will be passion. You can really see their passion, if you look at the dancers, also the singers and the musicians, there is a lot of passion being put in the show and that gives you a lot of energy.”

Mrs. Simon-Tjoeng, on the other hand, could really connect to the story of the Monkey King. “I am a monkey in the Chinese horoscope. I’m a little bit naughty but with the right guidance it is possible to finally find the right path. It’s a good lesson for everyone,” she said.

Shen Yun combines about 20 different pieces including story dances, to give the audience a unique insight into ancient and even present-day China. The legend of the Monkey King is one of those stories.

Mr. Simon said that the story about the Falun Dafa practitioners in modern-day China was very “impressive.” He said: “It says something about the injustice that is done to the Dafa practitioners in China, those who actually follow the real traditional Chinese values. And sometimes their life, their practice is made quite difficult in China because of the government.”

Mrs. Simon-Tjoeng also had some positive comments on the scenes depicting traditional values in modern-day China: “About Falun Gong, how the Chinese government treat them … It’s to open up people’s eyes, because outside not many people know about Falun Gong.”

As a make-up artist, she could also appreciate the amount of detail that went into the costume design and headpieces. “They go to every detail. With the crystal in the clothes and the wraps around the hair, it’s very eye catching. Especially the color, very nice.”

Costumes are an integral part of Shen Yun, they use bright colors to tailor and recreate hundreds of new pieces each season, the hand-made garments span China’s dynasties, regions, and ethnic groups, the company says.