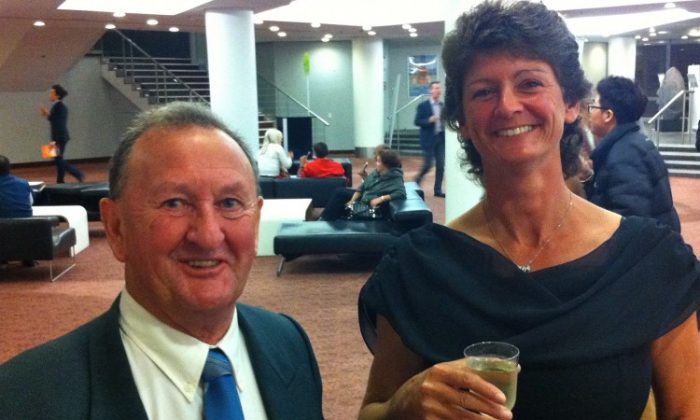 Herb Blakemore, a debt collector, had come along with Leanne Clark, who works in accounts. It was the third time that Mr. Blakemore had watched the show..

New York-based Shen Yun is a classical Chinese dance and music presentation touring the Pacific region in order to revive the true Chinese traditional culture that all but disappeared during 60 years of communist rule.

“The fitness too. The fitness is just incredible, that’s what I’ve noticed-especially the men, the men are just super fit-it’s incredible,” said Mr. Blakemore.

Classical Chinese dance is one of the most comprehensive dance systems in the world and requires intensive training to master the many techniques, including the challenging tumbles and flips, according to the company’s website.

“And … when they land they’re so graceful you can hardly hear them,” said Ms. Clark.

Each year Shen Yun creates hundreds of hand-sewn costumes from countless designs for figures such as emperors and ministers down to the common clothing of every day people, says the website.

According to Ms. Clark, the costumes were fantastic. “The silk, especially the way it just flows,” had left an impression on her.

Mr. Blakemore remarked that the performance had an underlying theme about good and evil, and he related this to groups that had broken away from communist system of rule in China and who were no longer allowed to return home.

“Well I think the main thing-good and evil seems to be the same theme, … and good, hopefully, winning over evil,” said Mr. Blakemore.