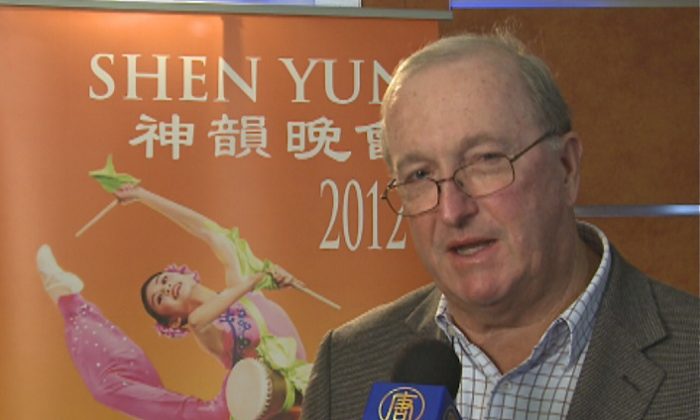 At the performance on Tuesday May 1 was Alan Lawrenson, a retired scientist. It was the first time Mr. Lawrenson had seen classical Chinese dance. “I’m extremely impressed. I find that a great experience,” he said.

“I think the production is very colourful, very artistic, very athletic, and I think it has also a spiritual element. Very, very impressed,” he said.

“I think the colour of the costumes just make it very impressive,” he said.

According to the Shen Yun website, the costumes are hand-sewn, incorporating vivid colors and elegant details, and are inspired by five millennia of traditional Chinese culture, and span China’s dynasties, regions, and ethnic groups.

China’s true authentic 5,000-year-old culture is believed to be divinely inspired, and its principles, such as benevolence, justice, and wisdom, originate from Daoist, Buddhist, and Confucian faiths, says the company.

Mr. Lawrenson felt that the spiritual essence of the traditional Chinese culture would be good for more non-Chinese Australians to see.

“I’m overwhelmed with the quality and the message that it sends,” he said.