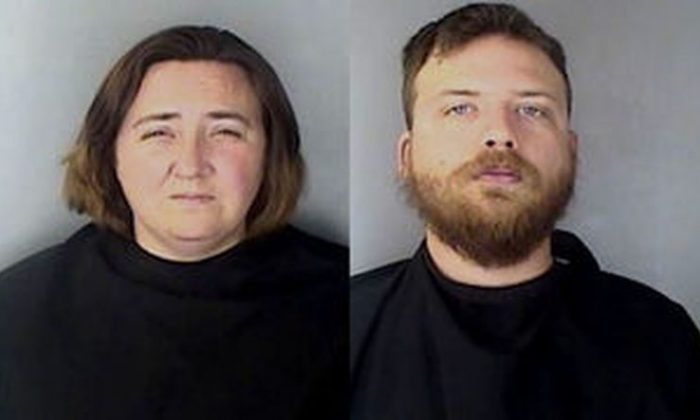 Officials were called to the home of Jessica James and Skylar Craft on Edgewood Drive on Nov. 19. (Greenwood County Detention Center)
US News

A South Carolina animal shelter said it rescued a Great Dane that ate one of its own feet to survive after its owners allegedly starved the animal.

Skylar Craft, 38, and Jessica James, 32, were charged with animal cruelty, The Associated Press reported on Dec. 5. A police report said officers were told in November about a “very skinny” Great Dane that was missing his right back leg.

The 6-year-old dog was tied to a metal pole when officials discovered the animal. Police said there was no food or water in the vicinity.

The 6-year-old dog was tied to a metal pole, and police say there wasn't a food or water bowl nearby. A police report…

“When I approached the fence I could see a very skinny black Great Dane with an injury to his back right leg. As he got closer I could see that over half of his leg was gone,” a responding officer was quoted by Fox Carolina as saying. The couple also told police they couldn’t afford to take the dog to the vet.

The owners told police they didn’t know how long it had been tied up or how long it was injured, according to the AP report.

Sweet LUKE is CRITICAL. Please, Help Us, Help Him by…

The dog developed an infection that apparently went to the bone, the organization said.

“Poor Luke has got to be one of the saddest cases we have had in a long time,” Noah’s Ark Rescue wrote on Dec. 2. “All of the pups we save are sad and desperate but his reaches down into your Soul.”

The group added: “Luke was so distraught and scared that I decided we needed to go ahead and get him out of the Hospital for a couple of days to get him settled down. The good news is within a couple of hours of being with us at the Rehab Center, he began to relax and was no longer fearful.”

The emaciated dog only weighed about 70 pounds. Male Great Danes typically weigh between 120 and 200 pounds, and females weigh from 99 to 130 pounds.

“He is so starved that it is hard to believe he has the strength to take two steps. He looks like a dog that is not going to live past the end of the day. His eyes are sunken into the back of his eye socket. His nasal cavity and eyes are infected and drain constantly. I have seen a lot of sick dogs but what has happened to Luke is beyond inhumane,” Noah’s Arks said.

“Luke has gone back and forth to the vet to have his bandages changed because that is one place where he does not like us fooling around. His leg hurts even on his pain meds and is horribly infected. Even though he is on the proper antibiotics for the bacteria he is growing; his leg drains continuously. I finally decided it was too risky to keep the leg with the nasty infection he has.”

The group said the dog doesn’t have any cancer.

And, “We believe his issues are from being starved almost to death. The medication we have him on for his constant diarrhea is working, and we have been able to increase his calories and change his food to a high-quality kibble which he loves. Luke is still in danger of Re-Feeding Syndrome which is why we have to regulate his food and slowly increase it,” it said.