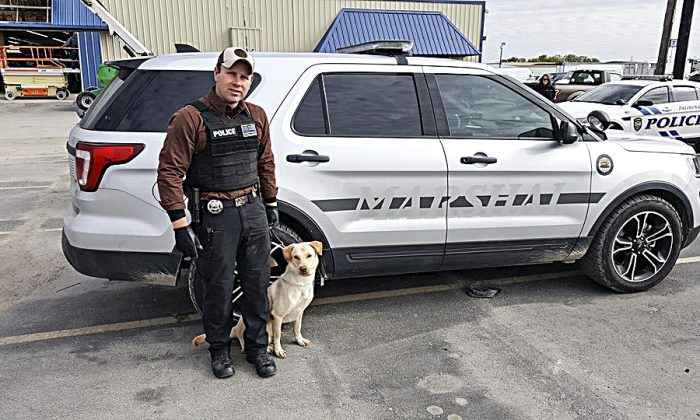 K-9 Duke and his handler.(Courtesy of Brad Croft)
US

A simple phone call in the late ’90s propelled Brad Croft onto the path of saving lives. His wife called him to say someone had been breaking into cars near their home and she was worried.

“Just get a gun,” he said. Scared of guns, she refused. And so they decided to get a guard dog instead.

Croft bought a trained German shepherd and the dog’s performance intrigued him.

“I wanted to know how to teach dogs to serve a purpose other than being a good pet,” he said. “I loved the idea of having a dog protect, detect, or track.”

So he plunged into learning the art of dog training and emerged several years later as a professional dog trainer with a new career—a radical departure from running his swimming pool remodeling business.

Then, five years ago, an idea came to him: Maybe police dogs don’t have to be purebred German shepherds, Belgian malinois, Dutch shepherds, or labradors. Perhaps dogs of less distinguished lineage could to do the job just as well.

Looking back, Croft seemed destined to think of the underdog.

He grew up in San Antonio as a die-hard dog lover in a city with a serious stray dog problem. In some neighborhoods, packs of strays endangered children and elderly people walking down the street.

But Croft loved them. “I would find stray dogs as a young kid and bring them home, begging my parents to let us keep them,” he said. “We ended up with five stray dogs, until my parents said no more.”

Learning how to train dogs gave him a deeper understanding of their nature, he said.

There were just thousands … of these dogs that were being put down every day that would be perfect for this.
— Brad Croft, dog trainer and founder of Universal K9

“You have to look for the drive within the dog,” he explained.

Police dogs need to be strongly motivated to accomplish goals. The goal can be getting a favorite toy or a treat. But they need to be willing to do whatever it takes to get it.

Croft started to visit shelters to see if he could find such dogs. And he did.

“I was just amazed at what I was seeing,” he said. “There were just thousands … of these dogs that were being put down every day that would be perfect for this scenario [of police dog training].”

So he started to rescue the dogs and train them.

“You have to understand something,” Croft said. “These dogs that come from shelters have all kinds of things wrong with them.

“Some of them have been abused. A lot of them have a lot of rules that have been put on them: ‘Don’t do this! Don’t jump up there!'” he explained. “Those rules hinder what I’m trying to teach the dog to do, which is ‘jump on this, sniff that, do this, do that.’ All the things that he’s been told not to do are the things I want him to do.”

Croft had to find a way to undo and then redo the training, a process that can be confusing for the dog. “I have to kind of spin them backwards to bring them forward,” he said. Over the years, he perfected his method and can now retrain a dog in four to eight “pretty intensive” weeks.

The role of a police dog was traditionally reserved for purebreds purchased for thousands of dollars, often from Europe. Nobody believed crossbreeds from shelters could perform just as well.

“Everybody told me that I was going to have a hard time giving dogs away,” he said. “I had to fight the stereotype. The military, the police, all these people think one way and it’s real close-minded. And if you try to bring something new into the mix, they balk at it.”

But he held to his belief with pitbull tenacity. “I just didn’t care what people thought,” he said. “I knew it would work.”

He came to believe that any dog could be a police dog if trained well. “This is not a breed-specific thing. This is a God-given gift. And all dogs have it,” he said.

He proved it with Zoey, a pitbull mix he picked up at Kirby Animal Care Services, just outside San Antonio.

The Alachua County Sheriff’s Office in Florida needed a school resource dog, and Croft thought Zoey was a perfect match. She was the right size and good with children. The only problem was, she was a pitbull.

“Nobody likes pitbulls for some reason,” Croft said. They have a reputation for being aggressive, but he believes it comes from training. “There are no bad dogs,” he said. “There are bad owners.”

It took weeks of phone calls, and sending pictures and videos of Zoey in action, before Croft convinced the sheriff’s deputy to accept her. “I talked him into it,” Croft said. “He tells me every day how grateful he is.”

Stories like Zoey’s helped spread the word about Croft’s approach, and media soon started to pay attention. ABC World News introduced his dog training business during its segment on inspiring people in America.

His success stories are all the more powerful because he often saves dogs most at risk of euthanasia.

The driven, energetic dogs he seeks are exactly the ones thought to be difficult to maintain as pets. They were often left behind in shelters and eventually put down.

He has even pulled several dogs straight off death row. Max, a German shepherd, was scheduled to be euthanized when Croft found him at Animal Care Services in San Antonio.

“I said, ‘Give me that dog. I want that dog right there,'” he recalled. Max is now a K-9 with the Jackson County Sheriff in Florida. “That dog has put down so many drug busts, it’s incredible,” Croft said.

Croft gives the dogs to police for free. Instead of paying $15,000 to $20,000 for a dog, the police department only has to pay $2,000 to $4,000 for training its K-9 handler. That’s enough for Croft to sustain his operation, which is now a nonprofit. Additional donations and grants have helped him expand.

His company now trains about 20 dogs a month, continually proving his philosophy.

Most of the shelter dogs are trained for drug and explosives detection and tracking, but not suspect apprehension. For that purpose, the dog needs to be big, fast, and strong enough to take down a person. Such attributes come naturally with a purebred German shepherd or Belgian malinois, but rarely with typical mixed-breed shelter dogs.

He can’t tell what breed mix his own dog, Sadie, is. But she performs so well, he uses her to demonstrate his method to police. “When I bring her down, all the cops are laughing,” he said. “But when they see her work, they’re like, ‘Ok, I get it now.'”

Right now he is working with a tiny beagle-springer spaniel mix from a shelter. “We call him Shoebox because he’s the size of a shoebox,” he said. “But this dog is going to be a rock star at finding drugs.”

Croft’s approach is now so popular he has a waitlist of police and sheriff departments.

“We’re saving a dog to help law enforcement to protect our communities and to save taxpayer dollars,” he said. “How can you beat that?”