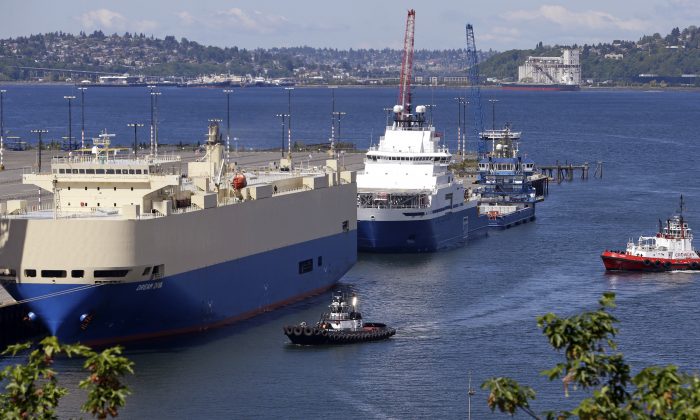 After seven years of preparation and several billion dollars spent, Shell has decided to abandon its exploration program in the U.S. Arctic “for the foreseeable future.” This follows barely two months’ drilling in the Chukchi Sea at the company’s Burger J. well, located 150 miles northwest of Barrow, Alaska. Evaluation of all data revealed “indications” of oil and gas but not enough to justify further activity in today’s low price environment.

To those of us in who closely follow the energy industry, the decision is hardly surprising. But it has meaning well beyond the Chukchi Sea. It helps show that the widely proclaimed “land rush” to the Arctic, aimed at oil and gas most of all, is a myth.

There is no such roar of companies northward, crossing the Arctic Circle as if it were a Rubicon. In fact, economics and geopolitics have made clear that the greater part of the Arctic would remain quiet to hydrocarbon drilling—at least in the near term. And so it has.

Does this mean anti-Arctic drilling advocates have handed “Big oil … an unmitigated defeat,” as Greenpeace says. No, it doesn’t. Other factors than environmentalists’ opposition are far more important.

The Burger well is located in the Chukchi Basin, part of the U.S. Outer Continental Shelf (OCS). The basin is largely unexplored, with an estimated mean of 29 billion barrels oil-equivalent potentially recoverable—a significant fraction of the Arctic’s undiscovered oil. The size of Mississippi, the basin had only five wells before the Burger. Thus the province remains a true frontier, with chances of a discovery for any well quite small.

Shell’s costs, however, were large. The company spent $2.1 billion to lease 275 offshore blocks and another $1 billion in preparations and drilling. All of this for a single, disappointing well.

Burger J. was drilled in 150 feet of water to 6,800 feet depth. Though well offshore, the OCS is shallow here, adding to its attraction since this means lower drilling costs. Besides “indications” of hydrocarbons, the company undoubtedly recovered a lot of valuable data, growing its knowledge base for the future.

Shell’s departure is certainly a pause in a new era of Arctic exploration. It is not, however, an end. The company has said nothing about dropping any of its 275 blocks in the basin.

We should take Shell seriously regarding the three reasons it gives for leaving.

The first is the lack of a major discovery. The second is the low-price environment that now exists. Oil prices indeed went over a cliff between the time when Shell finalized its program in 2014 and when it began drilling this past summer, falling from about $100 to $45. At such prices, only a gigantic find, say one billion barrels, would make any sense to develop.

And the third reason? “The challenging and unpredictable federal regulatory environment in offshore Alaska,” is how Shell puts it. Can we accept this argument?

Shell’s program was trapped in a historical shift. Originally conceived in the 2000s and ready to launch in 2010–2011, it was put on hold by the BP Deepwater Horizon disaster. This event, with its enormous public outrage, led to a complete revamping of the federal offshore regulatory system. The old Minerals Management Service (MMS), accused of sharing the sheets too often with industry, was replaced by a more vigilant Bureau of Ocean Management (BOEM).

Shell’s program had to adapt, gaining approval for the 2013 drilling season. But then Shell’s Kulluk drilling rig broke loose from its cable tow and ran aground in Alaska in late 2012. Another round of outrage and reporting inspired BOEM to impose new demands for environmental protection.

A Grim Future for Oil Drilling and Service Firms

In this way, advocates against Arctic drilling have “won”—by adding their voice to public concern. Some may say they helped create such concern, and to some extent this may be true. But the shift relies much more on industry acting as its own worst enemy at a time when the public has become increasingly worried about climate change, carbon emissions, and oil spills. A major accident in Arctic waters will do more to weaken future drilling than hundreds of kayakers in every port of North America.

All Quiet on the Arctic Front

No company, American or foreign, will rush to replace Shell in the Chukchi Sea. Nor will they view its departure as a juicy opportunity. This would be true even if the BOEM decided to replace all of its staff with industry personnel from Texas.

Meanwhile, there are no big plans for Arctic drilling in Canada or Greenland. The former has seen ConocoPhillips end exploration in the Canol Shale of the Northwest Territories, despite a possible discovery. Roughly a dozen wells have been drilled in the seas around Greenland during the past 15 years, with no success and cooled interest, though leases are still actively held.

Russia has big plans, to be sure, with few concerns about environmentalism, but no ability to carry such plans out just now. It needs the help of western oil companies, who are banned from working with the state oil firm, Rosneft, in Russian waters until sanctions are lifted. Bluntly put, Rosneft lacks the technological, operational, and managerial expertise needed to carry out a big program in the Arctic offshore.

That leaves Norway. Its Arctic waters have seen some successful drilling in recent years, such as at Goliat Field, operated by the Italian group Eni. Yet the big lease sales of the past decade haven’t yielded anything like a surge in exploration. Few companies are ever eager to spend lavishly in a challenging setting when opportunities exist in less formidable places, especially if lower prices set in. At present, the Norwegian Arctic may be the only place where true hydrocarbon development is taking place, but it is hardly equal to the fracking boom of the U.S. Lower 48.

In short, the Arctic is simply too risky, challenging, and expensive for a “land rush” or any kind of rush. Even at $100 per barrel, ventures into the region were cautious. So they will remain, should prices find such heights again soon.

It’s perhaps no surprise that cheap oil seems a friend to the people who oppose Arctic drilling. The only problem is that it is also the comrade of higher consumption and demand. That means at some point, higher oil prices, driven by demand, may again make the Arctic more tempting in the future.

Scott L. Montgomery is an affiliate faculty at Jackson School of International Studies, University of Washington. This article was previously published on TheConversation.com