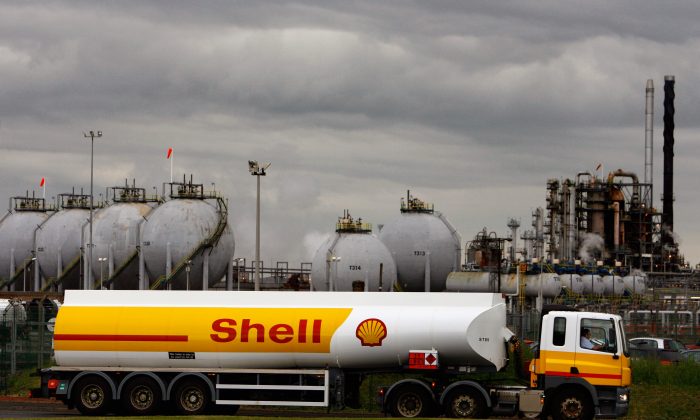 LONDON—Senior executives from oil giants Royal Dutch Shell and Eni are facing corruption charges in Milan over a $1.3 billion deal for a huge African oil field.

Italian prosecutors allege that $1.1 billion from the deal didn’t go to Nigeria, where the oil field OPL 245 is located, but to accounts belonging to former oil lawmaker Dan Etete. He is accused of subsequently distributing hundreds of millions of dollars to others as bribes, including to former Nigerian President Goodluck Jonathan.

The trial starts this week, with defendants that include former Shell Vice President for sub-Saharan Africa Peter Robinson and former company board member Malcolm Brinded.

A briefcase uncovered in an apartment in Geneva could hold the keys to the case. It belonged to Emeka Obi, who is alleged to have earned hundreds of millions as a middleman, according to the Independent.

The case contained a hard drive with 41,000 documents on it that could be central to the case, along with two Nigerian passports, and five SIM cards.

It was discovered in an apartment belonging to a former Credit Suisse banker, Olivier Couriol, who is under investigation in two other cases involving international corruption.

Couriel claims that Obi was on holiday and accidentally left his briefcase in his apartment, but prosecutors allege it was put there intentionally to hide it from investigators.

Some of the documents recovered from the briefcase have been cleared by a court in Geneva to be unsealed for use in Milan. But with Obi starting a new appeal to block that, and the possibility of his trial being “fast-tracked” in Milan, the race is on.

The OPL 245 oil field, which contains about a quarter of Nigeria’s oil reserves, was handed to a company called Malabu Oil and Gas in 1998. Malabu was controlled by Etete, who has since been convicted of money laundering.

Rights to OPL 245 were sold in 2011, with the payments being handled by the Nigerian government. However, $1.1 billion was transferred into Malabu’s accounts, most of it routed via banks in London. Shell has repeatedly denied it knowingly dealt with Etete and says it sent payment to Nigeria.

In a statement released in Dec. 2017, the company said, “Shell attaches the greatest importance to business integrity. Shell has clear rules on anti-bribery and corruption and these are included in our Code of Conduct for all staff. There is no place for bribery or corruption in our company.”

Eni also refutes any wrongdoing, saying in a statement that it “reaffirmed its confidence that the company was not involved in alleged corrupt activities in relation to the transaction.”

But anti-corruption watchdog Global Witness alleged in April 2017 that leaked emails showed Shell was aware where the money would end up, and that they had been in contact with Etete more than two years before the deal was concluded.

Emails allegedly from ex-MI6 agent John Copleston, who was being employed by Shell, show him discussing a meeting with Etete.

In Oct. 2009, Copleston purportedly wrote that he had met with Etete: “We are getting along very well personally—lunch and lots of iced champagne.”

In March 2010, another ex-MI6 agent, Guy Colegate, reportedly wrote to Peter Voser, Shell’s then-CEO: “Etete can smell the money. If at nearly 70 years old, he does turn his nose up at nearly $1.2 bill, he is completely certifiable. But I think he knows it’s his for the taking.”

Hundreds of millions of dollars from the deal flowed through the London branch of JPMorgan, which is now being taken to court for “gross negligence” by the Federal Government of Nigeria.