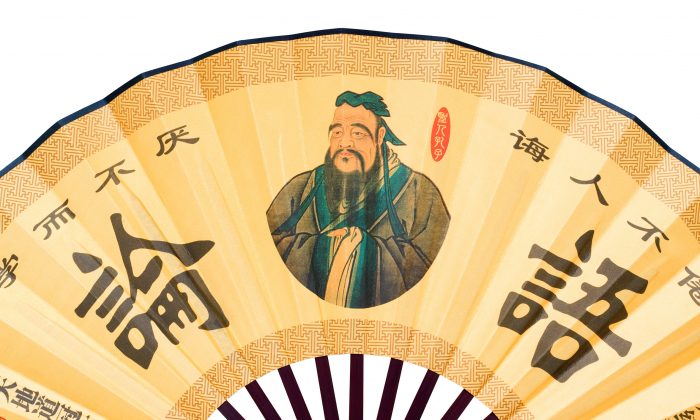 A portrait of Confucius decorates a Chinese folding fan. In the “Analects (論語) of Confucius,” the sage advised rulers, “To govern a large country, handle affairs in a prudent and serious manner and always be sincere, honest, and trustworthy.” (Fotolia)
China

How many shepherds do you need for 10 sheep?
By Cindy Chan and Duoyu Zhong
biggersmaller
Print

Organizations today operate in a world of uncertainty and rapid change, and weighty, new challenges that managers need to tackle are ever present and evolving. But the good news is that much great wisdom can be derived from lessons in history, and one rich source is ancient Chinese wisdom.

For example, in the “Analects of Confucius,” the first chapter lays out timeless advice on the subject of learning, and the fifth verse speaks to governance.

Confucius, who lived some 2,500 years ago, said: “To govern a large country, handle affairs in a prudent and serious manner and always be sincere, honest, and trustworthy.

“Be frugal in managing finances (save and don’t be wasteful), and love and care for the people. Let the people’s needs guide the proper timing for utilizing their labor.”

To govern a large country, handle affairs in a prudent and serious manner and always be sincere, honest, and trustworthy.
— Confucius

The last point was made in the context that ancient China was an agricultural society. The sage was advising rulers to wait for the right timing in the planting calendar to enlist the people for public works projects. This was to avoid creating hardship during those periods when the people were busy with farming and other productive activities essential to their livelihoods.

Another source of ancient Chinese wisdom applicable to leadership and management is the famous classic “The Art of War” by the renowned strategist Sunzi, a contemporary of Confucius. Sunzi stated that in war, “supreme excellence is not to fight and conquer in battles, but to subdue the enemy without fighting.”

In honor of the Year of the Sheep, here are three stories from ancient China containing wisdom and common sense that remain useful and relevant for managers and leaders of all kinds in the modern day.

The first story is about an idiom that originated from a senior official’s report to an ancient Chinese emperor.

About 1,500 years ago, the Sui Dynasty (A.D. 581–618) was established by Emperor Wen when he unified China for the first time after over 100 years of North-South division.

The emperor had some loyal court officials to help him. One of them was Yang Shangxi (about A.D. 533–590).

Yang noticed some challenges in governing the country. There were too many counties and county officials, due to the different administrative jurisdictions carried over from the previous dynasties. Thus, most of the officials were responsible for small regions only, or they were serving no actual, useful function.

This situation not only imposed heavy costs on the government but was also a hindrance to getting things done smoothly. Yang felt very worried, so he filed a report to Emperor Wen.

Yang wrote: “There are now too many counties and too many officials, just like having 9 shepherds for 10 sheep. It is creating heavy costs for the court and generally making it take a long time to get things done.

These changes will allow the government to greatly reduce spending and to administer state affairs much more efficiently and effectively.
— Yang Shangxi, Sui Dynasty official

“Reducing the number of counties and officials is an urgent priority for the state. I recommend that we maintain only those administrative regions that make sense, and assign capable officials to locations where they are truly needed. For the officials who are dismissed, we can offer them other jobs.

“These changes will allow the government to greatly reduce spending and to administer state affairs much more efficiently and effectively.”

The idiom describes a situation in which there are too many people giving orders and not enough people to carry them out.

It is also used to convey the importance of having clear lines of authority in managing any task or organization so that there is no confusion or uncertainty about whose orders to follow.

Following the Right Path With Determination

The second story is about an idiom inspired by an ancient story concerning the search for a lost sheep.

Yangzi was a famous philosopher and scholar from the Warring States Period (475–221 B.C.). One day, his neighbor lost a sheep and mobilized his whole family as well as many others in the community to help look for the animal. Yangzi also sent all of his students and servants to help.

When night fell and everyone returned, Yangzi asked, “Have you found the sheep?”

One of Yangzi’s servant replied: “There were many forked roads, each one leading to more forked roads. Because I did not know which road to follow, I gave up.”

The others said they encountered the same situation.

Confronted with many choices and complicated issues, one seeking to accomplish a goal is likely to go astray unless one has determination and chooses the right path.

Yangzi became thoughtful and silent for a long time, looking very serious and leaving everyone puzzled.

Then, after deeply pondering the situation, he taught the following principle to his students: “When there are too many side roads diverging from the main route, you are unable to find a lost sheep and could easily lose the way yourself.

“Similarly, when a person has too many interests diverging from his main goal, he can easily fritter away his time.

“There is only one true source of knowledge, but the paths to attaining this knowledge are many. Only by following the right path to return to the ultimate truth can a man avoid losing his way.

“If you fail to find the right orientation, you will accomplish nothing, just like those who failed to find the lost sheep.”

It describes losing one’s way, going astray, or becoming hopelessly confused in a complex situation where there are too many possible paths or alternatives.

The idiom is used to caution that, when confronted with many choices and complicated issues, one seeking to accomplish a goal is likely to go astray unless one has determination and chooses the right path to follow.

A Wise Judge Transforms a Conflict

The third story tells of a farmer in ancient China with a neighbor who was a hunter. This hunter owned ferocious and poorly trained hunting dogs. The dogs frequently jumped the fence and chased the farmer’s lambs. The farmer several times asked his neighbor to keep his dogs in check, but his words fell on deaf ears.

One day the dogs again jumped the fence and attacked several of the lambs, severely injuring them.  The farmer had had enough, so he went into town to consult the local judge.

The judge listened carefully and said: “I could punish the hunter and instruct him to keep his dogs chained or locked in a shed. But you would lose a friend and gain an enemy.”

He then asked, “Which would you rather have, a friend or a foe for a neighbor?”

The farmer replied that he would prefer a friend.

“Then I will offer you a solution that will keep your lambs safe as well as turn your neighbor into a friend,” the judge said.

I will offer you a solution that will keep your lambs safe as well as turn your neighbor into a friend.
— A judge from ancient China

After hearing the judge’s solution, the farmer agreed. Once at home, he immediately put the judge’s suggestion to the test.

He took three of his best lambs and presented them to his neighbor as a gift to the neighbor’s three small sons. The boys were beside themselves with joy and began to play with the lambs.

To protect his sons’ cherished lambs, the hunter built a strong kennel for his dogs, and the dogs never bothered the farmer’s lambs again.

From then on, the hunter frequently shared with the farmer the game he had hunted. The farmer reciprocated by sending the hunter lamb meat and cheese he had made. Within a short time, the neighbors became good friends.

According to a saying from ancient China, “The best way to influence and win over others is with gestures of kindness and compassion.”