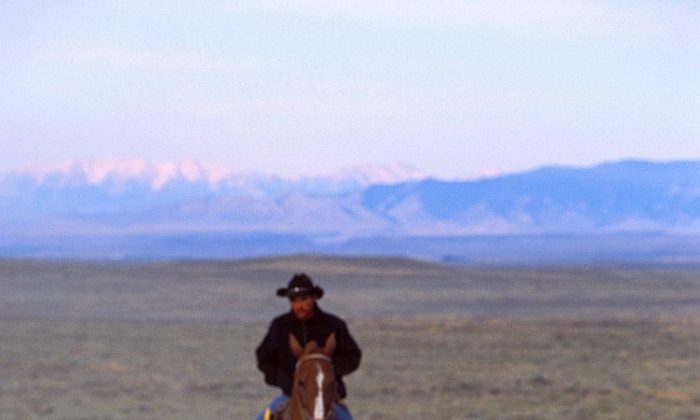 Sheep Herders of the West: An Unconventional Immigrant Story

Rodrigo gallops his horse through the vast, barren mountains of Idaho. For three consecutive months, it’s just him and his flocks of sheep in a portrait-like landscape—shared with grizzly bears.

Rodrigo looks back, his blood turning cold over what he sees: a grizzly is mounting after him.

The sheep herder hastily unlocks his gun and, after firing several shots, kills the bear. Panic-stricken, he remembers his host country’s laws against shooting such bears and, with the aid of his horse, drags the behemoth over a cliff.

Rodrigo recounts the dramatic story to filmmaker Andres Caballero, as he waits in an immigration office in San Francisco.

“I’d never ever do that again,” Rodrigo tells Caballero. “I can’t believe there are guys out there still doing that.”

Rodrigo is from a select group of immigrants who come to the United States to work as sheep herders. This special breed of worker most often hails from south of the border, choosing the open pastures over the 9-to-5 grind of the city.

“We are going to explore how a human being can live by themselves for two to three months. How does a person keep sane in this process?” Khan said. “There is a romantic and a dark side to this lifestyle.”

Due to labor shortages during World War II, the U.S. sheep industry struggled to recover on its own. In the 1950s, the Western Range Association (WRA) began recruiting foreign sheep herders under the H-2A program, which provided immigrants with temporary agricultural work visa.

These days, recruits mainly come from South and Central America, according to information on the University of Nevada website.

WRA goes to countries such as Chile, Peru, and Mexico to recruit shepherds who have had generations of experience. “They’re built, they’re made for this kind of environment,” Andres Caballero said.

The filmmaker added that while few U.S workers may be willing to live isolated on mountain ranges and deserts for $750 a month, for some immigrants it is a precious chance to send money back home.

Although a sheep herder’s life on the open range might seem strange in the 21st century, it is vital to the U.S sheep industry. “If it weren’t for the open range, sheep operations in the U.S would rely solely on small farms. And the numbers are low enough as it is,” explained Dennis Richins, executive director of WRA.

According to Caballero, the ranchers get cheap workers and immigrants get their hard-sought jobs; but not everyone gets a happy ending. The job comes with risk: “There’s definitely death involved in this profession,” Caballero said.

After spending some time with the herders, the filmmakers have heard a few stories: One man was killed by lightning; a less fortunate Peruvian man was killed by a grizzly bear. “Another Peruvian guy told me he found a guy shot to death. It’s not confirmed if it’s a suicide or murder,” Caballero said.

The filmmakers traveled to the grasslands of Utah, accompanied by a bear hunter. He told them the area had been closed just a few days earlier, as detectives investigated a human skull discovered nearby.

“I interviewed a member from a non-governmental organization, who said a Mexican shepherd disappeared” around that time, Caballero said. The bear hunter believed the skull belonged to that shepherd.

There was another shepherd who got caught in a blizzard while heading back to his trailer. “They found him the next morning, collapsed, 15 feet away from his trailer,” Caballero said. “He survived and the rancher sent him back to Peru. There are a lot of these stories.”

When the sheep herders are in the mountain phase of their work, they could be four hours away from ranchers. “You can’t drive up there. You have to go by horse,” Caballero said.

Phase one is in the fields, then moving on to deserts, and finally to the mountains in the spring—staying put for three months, according to Caballero.

Life of a Herder

The sheep herders work across the West in Idaho, Utah, Colorado, Wyoming, Texas, and California—with the latter two being the only areas with towns nearby, according to Caballero.

The herders live in trailers, which “usually do not have running water or electricity … really, they’re just camping on the range,” said attorney Jennifer Lee of Colorado Legal Services.

Lee mentions a bill was proposed in 2010 by State Rep. Daniel Kagan, D-Denver, to create a task force to examine the immigrant shepherds’ conditions in Colorado. But the bill “didn’t make it out of committee.”

According to Lee, “it’s a dangerous job and injuries are common.” But problems usually occur with workers being trampled or thrown off horses. “There aren’t many problems related to wild animals.”

“There are workers who like their employers, and are happy with their conditions—absolutely,” Lee said.

According to Kelli Griffith, executive director of Mountain Plains Agricultural Service (MPAS), workers often renew their three-year contracts to continue working as a U.S shepherd. “Workers come to us simply by word of mouth. They recommend it to their cousins and neighbors.” MPAS is an agency in charge of completing the paperwork for immigrant workers.

“A large percentage of our workers return, some for as many as 34 years,” Griffith said. “Obviously, there’s always going to be individual situations. The workers have the option of returning home if they’re not happy.”

According to Richins from WRA, there are no surprises. “During recruitment, they’re shown a video of what their life will be like.”

Although the sheep herders work seven days a week, are on call virtually the whole day, and only get a two-week annual vacation, “80 percent of them want to come back and get second contracts—some are even on their fifth one,” Richins said.

“They don’t work that many hours; they just have to be on call,” he said. “On call means just being in the area where the sheep are, looking out for predators, and making sure sheep are away from poisonous plants,” Richins said.

The trailers are state inspected every year; for some, twice a year. “We aren’t allowed to take in workers unless we have approved housing and workers’ compensation,” Richins said.