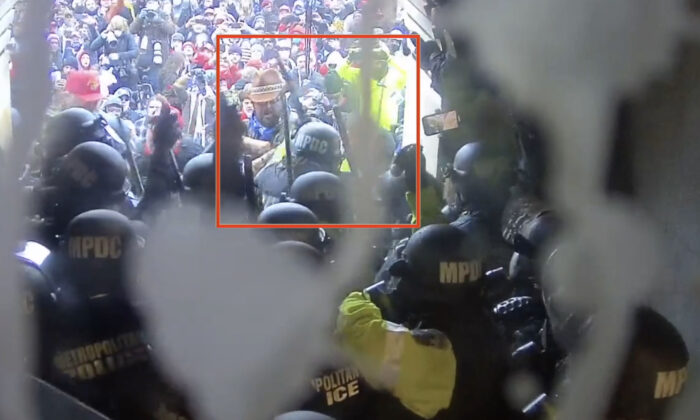 A Metropolitan Police Department officer raises her baton before striking Rosanne Boyland outside the West Terrace tunnel at the U.S. Capitol. (Video Still/U.S. Department of Justice)
US News

“It was hell itself.”

Philip Anderson doesn’t like to talk about that part of Jan. 6 at the U.S. Capitol. It’s just too painful, even with family and friends.

“It’s so terrifying to even bring it up. I don’t have to remember that until my very last day, until I die,” the 26-year-old told The Epoch Times. “It was the most terrifying thing I’ve ever experienced.”

Anderson was at the bottom of a pile of people caused by a stampede out of the West Terrace tunnel when police unleashed gas on the crowd of protesters.

Right next to him lay Rosanne Boyland, 34, of Kennesaw, Ga. They were crushed by the weight of a heap 4-5 people deep. It created an indescribable squeeze. The pain was made worse by a lack of oxygen.

Tragedy in the Tunnel

It all changed in an instant.

Anderson and Boyland walked into the tunnel at the same time that afternoon. They did not know each other, but Anderson would play an important role for the Georgia Trump supporter in her tragic final moments.

“I did not know her. I didn’t know anything about her,” Anderson said. “I didn’t even know that she existed until I saw her out of the corner of my eye.”

The tunnel was packed with people, shoulder to shoulder, about a dozen across and perhaps 20-25 deep. The crowd was trying to access the doors leading to the Capitol.

However, police had other plans. They unleashed some type of gas on the crowd. It seemed to suck the air out of the tunnel.

The crowd tumbled out of the tunnel, down the steps like a waterfall. Anderson felt his legs give out. He fell, dropping like a swimmer doing a belly flop. His fellow protesters piled up around him.

“It wasn’t that I tripped or anything like that. I cannot get air so I can move my arms, my legs. And then I fall.”

The terror was palpable as the weight of the pile crushed those at the bottom. Anderson and Boyland ended up near each other.

“She was begging and pleading. She was trying to scream but she couldn’t scream very loudly,” Anderson said. “She gave up on it and that’s when she reached out. She grabbed my hand. She’s reaching out to grab something. When she felt my arm, she grabbed my hand. She didn’t get to hold on for very long, though.”

Anderson felt such agony, he tried to prepare himself to die.

“I could feel that I was dying,” Anderson said. “I could feel it. That was the scariest part. I accepted that I was going to die. I was just praying to God at that point, ‘Just make it to where the pain stops, because I just need to go.’”

Anderson believes Boyland knew her time was quickly running out.

“She was holding my hand and then her grip completely loosens,” Anderson recalled. “I’m pretty sure that she’s accepted at this point she’s going to die. She knows it’s the end.”

Anderson, a conservative activist from Mesquite, Texas, would have met the same fate if it were not for fellow protester Jake Lang. He was at the tunnel entrance, begging police to stop pushing people out of the tunnel onto the pile.

“I’m screaming, Stop! Stop! You’re killing people. Stop pushing!” Lang told The Epoch Times in an interview from the District of Columbia jail, where he is being held awaiting trial on Jan. 6-related charges.

Lang tried to extract Boyland from the pile, but every time he helped remove one body from the mass, another one landed on top.

“Every single time I pulled another person off her, the police pummel somebody back over on top of her,” Lang said. “So she’s stuck at the bottom of this dog pile.”

Lang found that Anderson was not as tightly wedged, so he next tried to move him. As he grabbed Anderson under the arms, he noticed the young man’s tongue hanging out of his mouth.

“Like a bear-hugging motion, I’m able to pull his body weight up on top of my chest,” Lang said. “I unbunch him from this dog pile and I start dragging him down the steps.” Lang got Anderson to a medic station, where volunteers revived him.

A short time later, Boyland was freed from the pile, but she was no longer breathing. Protesters tried to render aid, but police sprayed many of them with mace.

At that point several enraged protesters charged the police line and engaged in hand-to-hand combat.

The bodycam video showed Boyland lying on the concrete nearby, unconscious. Then a Metro DC police offer began to beat the unconscious Boyland, striking her repeatedly in the ribs and the head.

Winchell’s shock is evident by his horrified facial expression captured on bodycam video.

The Metropolitan Police Department of the District of Columbia denied a Freedom of Information Act request by The Epoch Times for the officer’s bodycam footage.

The department has not replied to inquiries from The Epoch Times on the circumstances surrounding Boyland’s death.

The medical examiner for the District of Columbia ruled Boyland died from an overdose of a prescription medication. Family members said Boyland was prescribed the drug to treat attention deficit hyperactivity disorder.

It’s not known if the autopsy documented any injuries from the beating, or noted evidence from Boyland being crushed. The medical examiner won’t release any information beyond the cause and manner of death. He ruled Boyland’s death was an accident.

That conclusion does not sit well with Anderson. “She was literally okay, walking around like everyone else: normally,” he said. “The difference is that she got gassed and she got crushed and she got some mace on her. And then after all of that happened to her, she’s getting beat down on with the baton.

“The beating, that was just the cherry on top,” Anderson said. “She probably would have died even without that. But that sealed the deal, honestly, if she wasn’t already dead.”

Lang and Anderson both carry emotional scars from what they witnessed on Jan. 6.

“I have horrible PTSD, waking up from nightmares, seeing her face,” Lang said. “It’s just horrible because there is no closure. They murdered her and they won’t release the officer’s information.”

Anderson said he is angered by portrayals of Boyland in mainstream media as a domestic terrorist.

“She did nothing. She attacked no one. She didn’t even say anything to anyone,” Anderson said. “We’ve got half the country saying Rosanne is a terrorist, she got what she deserved. For what? She didn’t do anything. It’s crazy to me.”