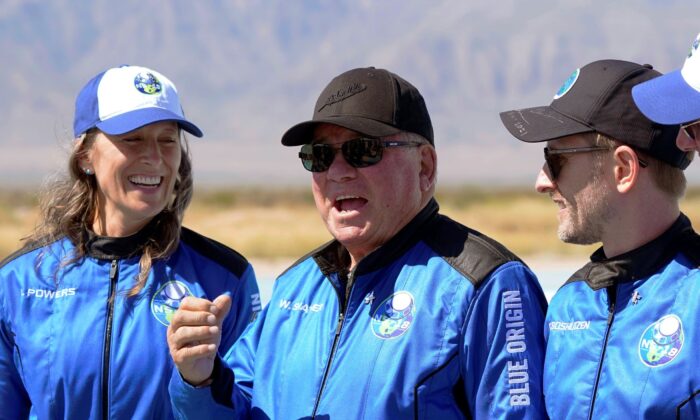 LOS ANGELES—William Shatner’s durable role as an avatar of space’s promise drew a frenzy of attention when fiction became fact with his rocket ride.

The “Star Trek” actor says he was as surprised by it as he was gratified by the 10-minute, suborbital jaunt made possible by billionaire Jeff Bezos. The experience is the subject of “Shatner in Space,” a hour-long special out Wednesday on Amazon Prime Video.

It details last October’s flight that made Shatner, 90, the oldest person to reach space. Bezos credits “Star Trek” with igniting his interest in space travel.

Shatner, whose decades-long career includes “The Defenders,” “T.J. Hooker,” and “Boston Legal” along with the original “Star Trek” series and films, wanted to be part of Bezos’ Blue Origin launch last July, its first with passengers. Shatner saw joining trip No. 2 akin to being named vice president when the Oval Office was the dream.

He discussed his change of heart and the flight’s impact in an Associated Press interview, shifting between a philosopher and blunt storyteller who, at one point, invoked 1937′s Hindenburg blimp explosion. Remarks were edited for length and clarity.

AP: The zest for adventure can ebb with the years, but it hasn’t with you. How do you explain it?

Shatner: Well, I’ve been doing a lot of foolish things, according to my wife, in the last many years. I’m probably an adrenaline junkie. A couple of years ago I drove a motorcycle across the country, and I recently went down 60 feet underwater and visited with four tiger sharks. I’m no stranger to thinking, “Oh, geez, I can die here.” But I didn’t feel the necessity of going up into space. Why do I want to put myself in that position? It’s uncomfortable. I’ve got, my wife calls them “velvet sheets,” I can just snuggle in. Then I thought a little further about it, the idea of weightlessness and going into space and just the feeling, and (decided) “I’ll do it.” When it caught people’s imagination I was absolutely shocked. I was as shocked about that as I was about the flight itself.

Shatner: I know. But that’s 55 years ago. There have been other things since then. The acquisition of knowledge was shocking, its popularity was shocking. Everything about it was extraordinary.

AP: Before the flight, you gave interviews in which you fretted about the dangers of the flight. Was that joking or jitters?

Shatner: Weren’t you brought up on the Hindenburg burning? It’s burning hydrogen. That’s what they’re putting in the (rocket) tank.

AP: You had an emotional conversation with Jeff Bezos immediately after the flight. What touched you so deeply?

Shatner: I immersed myself in the last 50 years in the connectivity of the Earth and how connected everything is. Everything is beautiful on Earth, and we have destroyed millions of (living) things. And then I saw the Earth giving life and I felt such sadness. I saw how finite the Earth is. And you and me are little dots, not as large as ants. We are insignificant on this insignificant planet. And yet we are aware, we are observers of that insignificance. And that’s significant.

AP: “Star Trek” depicted advanced human behavior that we’ve yet to achieve. How do you see the world politically, environmentally?

Shatner: Human beings resist change, probably part of our indigenous makeup. But change is happening so quickly, and more quickly than we imagined. The tipping points of these changes have happened in the last 50 years, and it takes longer than 50 years, I guess, for mankind to say, “My God, the poles are melting.”

AP: Are you optimistic about the future?

Shatner: I interviewed Bezos several times while shooting this documentary, and I’m hopeful that some of that will be in there. The last line he told me, which is what reverberates in my head, is, “You have to hope. Without hope, what is there?” So he’s busy trying to get industry up into space, up into geocentric orbit, which we have the technology to do.

AP: Many decades have passed since “Star Trek,” but people still see Capt. Kirk as part of your public persona. Is that something you wish for or not?

Shatner: Somebody once said, “You get the career you deserve.” And to change those words, you get the life you deserve. You made a decision based on what you knew at the time. You liked the guy, you didn’t like the guy; you wanted to live in the city. Whatever the instances were that you turned left instead of right. You can’t regret having made a decision because it was based on your need, whatever it was.