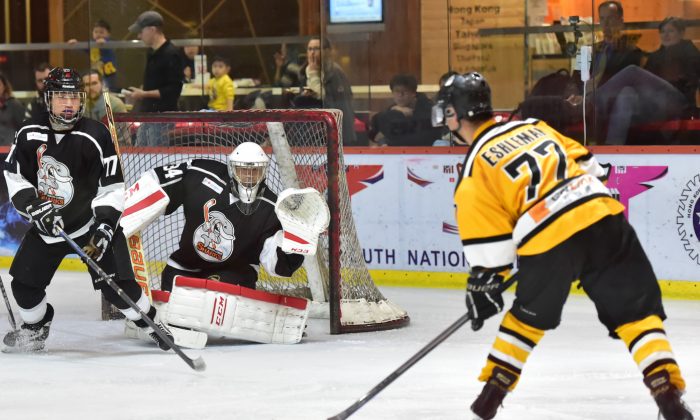 With 4 goals on the night, Lucas Eshleman of Hong Kong Tycoons lines up for a strike at the South China Shark’s goal during their CIHL match at Mega Ice on Thursday Feb 4, 2016. Caption: (Cox/Epoch Times)
HK Ice Hockey

HONG KONG—With five rounds left in the regular season South China Sharks still lead the standings with 18 points but Macau Aces in second place narrowed the gap to 4 points in the CIHL League at Mega Box on Thursday Feb 4, 2016.

Sharks were unusually quiet in their match against Hong Kong Tycoons with Tycoons always in the driving seat. Two goals in each of the first 2 sessions put Tycoons 4 goals to the good before Sharks made a score. But in the 11th minute of period 2 Sharks scored with a strike by Wayne Tsang to end the session at 4-1 to Tycoons.

Tycoons pushed further ahead in session 3 with another 3 goals taking their tally to 7-1. But Sharks responded more forcefully hitting the target 3 times in the last 3 minutes, through Tsang, Craig Roessel and Blake Steel to give a final match score of 7-4 to Tycoons. Tycoons’ scorers were Richard Simpson, Lucas Eshleman (4) and Patrick Henderson (2).

Three-star awards were given to Wayn Tsang of Sharks, and Lucas Eshleman, and Patrick Neunddorfer of Tycoons.

In the later match Aces and Kowloon Warriors were all square at 2-2 at the end of the first period. Goals by Devin Welsh and Jake McDonnell gave Warriors a 2 goal lead before Aces hit back with strikes by Jeff Ceccacci and Marcus Taeck. Four Warriors players were sin binned which led to strong attacks on the Warriors goal late in the session.

Although Aces had Yannick Wong off the ice for 2 minutes in the second period Aces continued their momentum notching up an early goal by Tyler Doherty and a second for Taeck late in the session. In period 3 Aces put icing in the cake with strikes by Keith Tsang and another for Ceccacci to take them to 7-2 midway through the period before Jasper Tang added a 3rd for Warriors to make the final score 7-3.