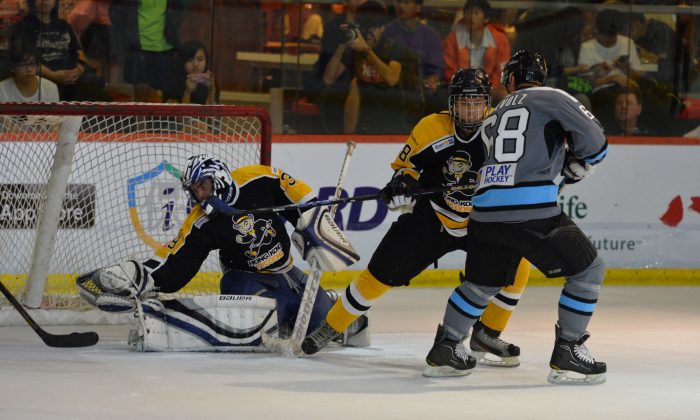 Sharks increase their lead to 4-2 over the Hong Kong Tycoons in the second minute of the second period with this goal by Anthony Devolz, assisted by Reto Broennimann and Justin Cheng. Sharks won a fast, close, exciting match 7-6 in the CIHL at Mega Ice on Saturday Oct 19, 2013. The puck is partly obscured by Devolz’s hockey stick blade on the left. (Bill Cox/Epoch Times)
International

The South China Sharks completed three wins in a row to increase their lead in the China Ice Hockey League at Mega Ice last Saturday Oct 19.

In a fast and furious match, Sharks kept their heads in front of the Hong Kong Tycoons as the match progressed though its three 12 minute periods. Sharks were leading 3-2 at the end of the first period with goals from Anthony Devotz, Justin Cheng and Jordan So for Sharks, and from Brennan Sonne and Drew Barton for the Tycoons.

The second period was very tight, but Anthony Devolz scored in the second minute to increase Sharks lead to 4-2. Then Adam Maglio pulled a goal back for Tycoons mid-way through the period.

In the third period, Justin Cheng and Jordan So both added to their tallies and Anthony Devotz completed his hat-trick for Sharks. But Tycoons were strong at the end, with goals by Jim Fanstone and Brennan Sonne to make the final score 7-6 to Sharks.

Warriors were in fine form in this match against the Macau Aces. Gregory Smyth scored five goals and Devin Welsh scored three goals, including two assists, to rack up a total eight goals for Warriors in the match. The Aces, under continual pressure could only score twice in reply through Jeff Griffin and Christian Long making the final tally 8-2 to Warriors.

Three star awards were given to Smyth and Welsh and Grant Philips for 4-assists.