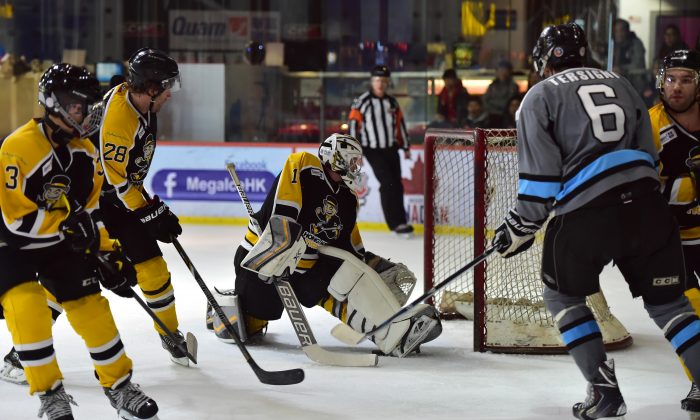 Trapped by the boot........Hong Kong Tycoons’ goalie Cody Drumm stops this attack during their CIHL match against South China Sharks at Mega Ice on Saturday Jan 24, 2015. Sharks went on to win the match in a tight 4-3 tussle and move within 2-points of the lead. (Bill Cox/Epoch Times)
HK Ice Hockey

HONG KONG—With just two rounds to play in the CIHL regular season the teams are bunching up for some great playoffs and the big finale. Macau Aces lead the standings on 14-points, South China Sharks and Hong Kong Tycoons are both on 12-points and Kowloon Warriors with their recent improved performance are just 1-point further back.

Close matches on Saturday Jan 24 indicate a tightening in levels of the teams with the League leaders Aces. Despite Aces 13-4 win over second placed Sharks just the week before, Aces found it tough going against the bottom placed Warriors team, that has recently been strengthened by the return from injury of Devin Welsh, one of Warriors’ star players from last season.

After a goal by Warriors’ Eric McKenna 4-minuts into Session-1 neither team could break through until the 3rd period when McKenna, assisted by Michael Yoshimo scored his second. Aces under pressure, threw everything into attack allowing Darren Winia to score for Aces mid way through the 3rd period bringing the deficit back to a single goal. Aces mounted many attacks, but the game was settled right at the end of the session when Jake McDonnell made the score 3-1 to Warriors. Goalies Jasen Awalt for Warriors and newcomer Jimmy Bjennmyr for Aces did a great job for their teams winning 3-Star awards as did Warriors’ Eric McKenna for his 2-goals and exceptional play in the match.

Tycoons vs Sharks
The match between Tycoons and Sharks was also a tight encounter with Brad Smith scoring twice to give Tycoons a 2-1 advantage at the end of the first period. Eduardo Paz levelled the scores for Sharks late in the 2nd stanza to go into the ice cleaning break 2-2. Bernard Fung struck for Sharks after just 29 seconds of the final session, but Jim Fanstone balanced the match to 3-3 for Tycoons just one minute later. The free scoring Jordan So regained the lead for Sharks making the score 4-3 two minutes into the session and despite many attacking attempts by the Tycoons the score stood at 4-3 to the Sharks.