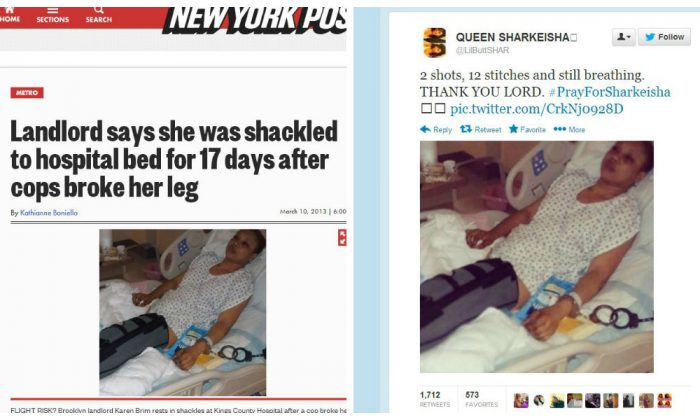 A screenshot on the left shows the New York Post article earlier shows a woman named Karen Brim who was chained to a bed for 17 days in Brooklyn. On the right, the "Queen Sharkeisha" account posted the same photo, claiming "Sharkeisha" was shot twice.
Social Media

Rumors of girl's death appear to have come from comedy website; while photo of girl in hospital bed is fake--from 'New York Post' Article from March 2013
By Jack Phillips

The terms “RIP Sharkiesha” and “Prayforsharkeisha”–referring to a Houston-area girl named Sharkeisha, who punched and beat another girl in a video that went viral last month–was  trending on Twitter Friday night, but it appears to be a hoax.

A fake photo posted by the “Queen Sharkeisha” account claiming to be the girl was taken from a New York Post article earlier this year about a 42-year-old woman named Karen Brim who was shackled to a hospital bed for 17 days in Brooklyn. The family of the girl claimed to be responsible for the Twitter updates about the shooting on Friday–including posting the photo of Brim.

A comedy website called Huzlers.com had earlier posted a fake story about her being shot in a drive-by. Huzlers on its Facebook says it is a website “for your daily laugh.”

It’s been speculated that the death hoax trended on Twitter before Sharkeisha claimed she was shot twice and went along with it, posting the fake photo of Brim. The Twitter account of “Queen Sharkeisha” wrote: “2 shots, 12 stitches and still breathing. THANK YOU LORD,” adding: “We hope everyone is safe, Happy Holidays to everyone, please be safe. We love you,” it added later.

As of Saturday morning, there was no media coverage of the incident.

Rumors saying that she was shot and killed in a drive-by shooting were posted several hours before the “Queen Sharkeisha” account wrote that the girl was shot along with posting the photo of Brim, which was retweeted thousands of times.

More than an hour later, the account wrote to its 41,000 followers: “I am forever The Queen.”

The Twitter account also retweeted a number of messages saying she got shot, including at least one that indicated she was killed. “Sharkeisha got killed bruh? Gah damn the game [expletive] up RIP,” reads the tweet, which was retweeted by the “Queen Shaarkeisha” account.

The origin of the rumors saying Sharkeisha died appear to have come from a comedy website called Huzlers.com, and it doesn’t appear the least bit credible. “Word on the street Sharkeisha is dead… Tun tun tun…,” it said in a Facebook post. Huzlers describes itself as a website “for your daily laugh.”

On Twitter, a screenshot of an article claiming she was killed in a drive-by was widely shared, but it had a “Huzlers.com” watermark. The screenshots did not show the URL or the name of an actual media website–only text of the article saying she died in a drive-by shooting.

Starting Friday evening, tens of thousands of Twitter users wrote “RIPSharkeisha,” and said that she was killed, while others wrote “Pray for Sharkeisha.”

Rumors and hoaxes can spread like wildfire on Twitter. For example, a hoax photo of Jennifer Aniston with a near-shaved head and an accompanying screenshot of a fake Instagram account claiming to be from her went viral on the social media website this week before they were debunked.

‘Sharkeisha’ Video: Victim in Assault Says She Forgives Her