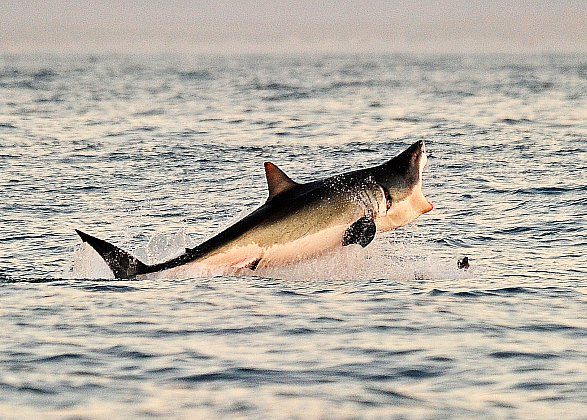 A Great White shark jumps out of the water as it hunts Cape fur seals near False Bay off the coast of South Africa. (Carl De Souza/AFP/Getty Images)
Entertainment

“Shark Week” 2013 is starting on Sunday night and will show all week on the Discovery Channel.

“Shark Week,” which broadcasted first in 1988, is the “biggest week of the year and brings in a lot of people who are not your core, common Discovery viewers,” Nancy Daniels, executive vice president of production and development for Discovery told the “Today” show.

She added, “It’s a pop culture phenomenon people talk about.”

The week of programming has featured more than 150 shark-themed shows over the years.

But this year, “Shark Week” will likely see a boost in viewership due to the campy Syfy-produced movie, “Sharknado,” which was heavily talked about on Twitter and Facebook.

For this week, Daniels said that a program about a massive shark is what she’s most excited about.

“For years we’ve found teeth of megalodon and we know they used to exist and we think they might still exist in ‘Megaladon,’ ” she said, referring to the shark.

The “Megalodon” program aired at 9 p.m. on Sunday. There is controversy over the special, regarding whether it’s real or not.

Discovery also will include a talk show with comic Josh Wolf called “Shark After Dark,” which starts 11 p.m. Sunday.

“Not only have I always been fascinated with ‘Shark Week,’ I’ve always wanted to do a late-night talk thing,” he told The Associated Press. “That’s been on the bucket list. This kills two birds with one stone.”

The full schedule can be viewed here.