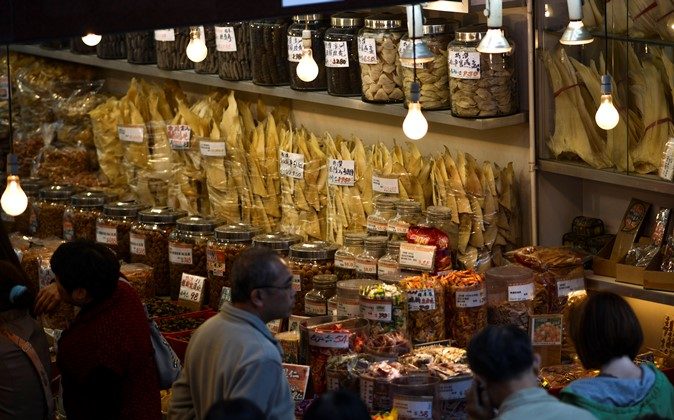 Shark fins on a shelf for sale in a shop in Hong Kong on Jan. 2, 2013. The Convention on International Trade in Endangered Species voted to add five shark species and manta rays to the list of protected species. (Antony Dickson/AFP/Getty Images)
Science

Shark Species Added to the List of Protected Species

ITATIBA, Brazil—The world’s major international wildlife conference, the Convention on International Trade in Endangered Species (CITES), approved a proposal to regulate international trade of sharks in a historic move as the conference wrapped up in Bangkok last week.

Under the new regulations, five species of sharks as well as manta rays will now have to be traded under a permit system.

The species have been in high demand because of the lucrative market for their fins in Asia. As some countries such as Brazil argued at the conference, the populations of these species have declined significantly in recent years. It is estimated that the fin trade is responsible for killing between 26 million and 73 million sharks a year worldwide.

“From now onward, they [protected species] will have to be traded with CITES permits and evidence will have to be provided that they are harvested sustainably and legally. These listings mark a milestone in the involvement of CITES in marine species,” according to a statement by CITES.

The proposal, which was supported by South American nations and the United States among a number of other nations, faced challenges by some Asian countries such as China and Japan, who argued that regional fisheries management organizations are better suited to make a decision on this issue. However, the proposal received the majority vote of the over 170 member states.

“Shark fins are valuable in international trade (wholesale value: US$20–$39 per pound) for use in food and popular dishes,” says a statement issued by the Brazilian government. The statement also points out that the fins of these newly protected species are the most common found in the market.

Monica Brick Peres, manager of aquatic biodiversity and fisheries of at the Brazilian Environment Ministry, was part of the Brazilian delegation at the conference. She explains that the inclusion of the species of sharks and rays in the list of protected species is significant as it reduces the danger of extinction for these species.

“These species have been included in Appendix II of CITES to adequately control the international market for their products and prevent the market exploiting these species to extinction,” Peres says.

“The measures taken by Brazil are very important, because Brazil has great access to the Ocean. To protect the [shark] species here would be of great significance for the survival of the species worldwide.”

“We can and should be a world leader in conservation of this group of animals. They are biologically sensitive, ecologically important, extremely interesting beings with high value to science and biotechnology, and deserve all our respect and admiration,” she says.

The fact that such a great number of nations voted in favor of adding the species to the protected list is proof that the world is starting to realize the importance of protecting these vulnerable species, Peres adds.

The European Union banned the practice of cutting sharks’ fins before throwing the shark back into the sea to die last year.

The CITES conference took place from March 3 to 14 in Bangkok, Thailand.