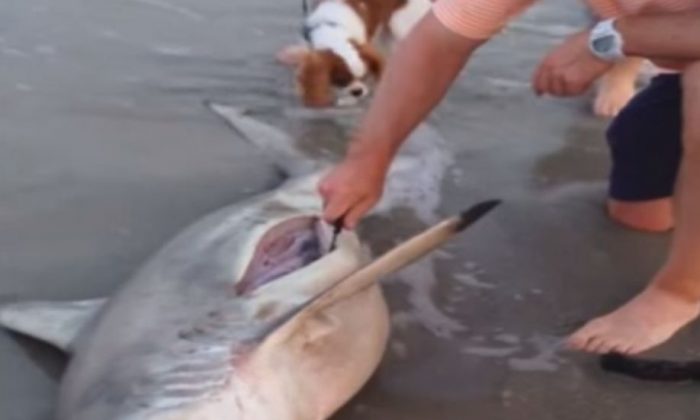 A video has captured the moment when a man sliced open a pregnant, dead shark to rescue her pups.

The pups were then led to the ocean.

The footage was captured in Cape Town, South Africa, after an American family saw the dead shark. They noticed that something inside of the mother shark was moving.

A beachgoer then uses a knife to cut open the shark before releasing her babies. There’s three pups in all.

The man then removes one pup before taking it to the water, and he is careful not to place his hand over the pup’s mouth, which has razor-sharp teeth.

He then goes back and finds two more before taking them to the ocean.

One person is heard saying afterward: “I think that is the coolest thing I have ever seen.”

The video has been viewed hundreds of thousands of times after it was posted on YouTube Monday.

It’s worth noting that a shark can be born three different ways, including via live birth, hatching from an egg, and an egg-and-live birth combination.

And “in some shark species, you have to survive gestation without being eaten by your developing siblings. Not that you could tattle to Mom once you’re out of the womb — after birth, shark pups are pretty much on their own,” according to HowStuffWorks.