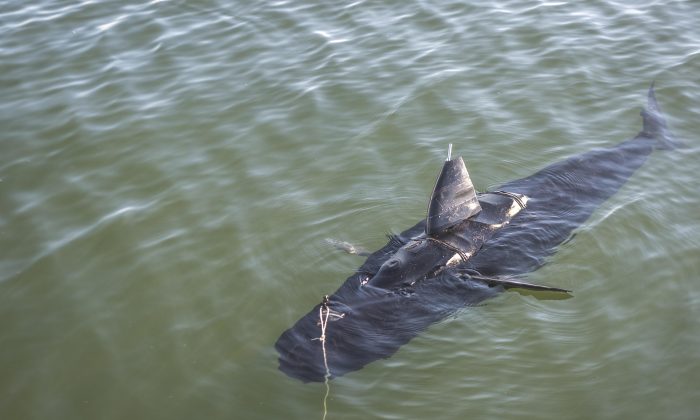 The US Navy has unveiled its latest asset–the Ghostswimmer–after it completed tests this week.

The unnmaned underwater vehicle, or drone, looks like a shark in the water, complete with “fins” sticking out. The project has been developed by the chief of naval operations’ Rapid Innovation Cell, said the Navy in a press release.

The project–called Silent NEMO–“explores the possible uses for biomimetic, unmanned underwater vehicles in the fleet,” the release says.

The bio-robotic drone can operate for extended periods of time in silence or close to it. It can also be controlled autonomously or via a 500-foot-long tether.

“GhostSwimmer will allow the Navy to have success during more types of missions while keeping divers and Sailors safe,” Michael Rufo, director of Boston Engineering’s Advanced Systems Group, said in a statement.

The drone was developed to look like a shark or a large fish. It’s about five feet long and weighs approximately 100 pounds and can operate in water depths ranging from 10 inches to 300 feet.

The fact that the drone mimics a large fish, it becomes even more difficult to detect. “Its bio-mimicry provides additional security during low visibility intelligence, surveillance and reconnaissance missions and friendly hull inspections, while quieter than propeller driven craft of the same size, according to Navy Warfare Development Command,” the release says.

“It swims just like a fish does by oscillating its tail fin back and forth,” added Rufo. “The unit is a combination of unmanned systems engineering and unique propulsion and control capabilities.”

The UUV will be used to gather intelligence, reconnaissance, and inspecting the hulls of ships.