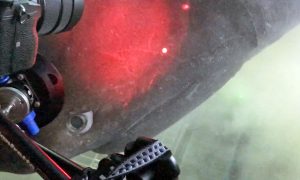 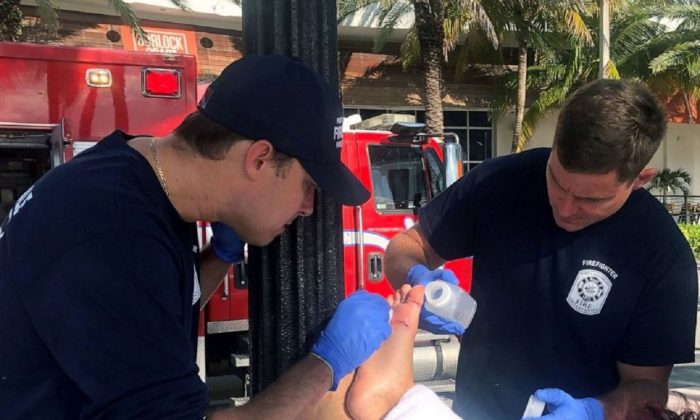 An 11-year-old boy receiving treatment for a shark bite while in Florida waters on Aug. 21, 2019. (Fort Lauderdale Fire Rescue Department)
US News

An 11-year-old Florida boy was bitten by a shark while swimming and rushed to the hospital but later released after getting 17 stitches.

Christian Mariani of Canada was swimming at Ford Lauderdale Beach on Aug. 21 just before 9 a.m.

He was taken to Broward Health Medical Center’s Salah Foundation Children’s Hospital and treated for a toe injury.

“It was really scary because I knew something bit me,” he said at a news conference broadcast by local media outlets, including CBS Miami. He got out of the water and saw blood on his foot.

Dr. Francis Amador said that the boy was “lucky” that the shark let go. The foot showed visible bite marks. It required 17 stitches.

“It was semi-circular,” Amador said. “I would say like 6 to 8 inches from pretty much one side to the other side. He has multiple lacerations, small ones,” Amador said. “It was like a flesh wound, so to speak. I guess the shark wasn’t that hungry after all, looking for a snack.”

A group of lifeguards who were training on the beach rushed over and performed first aid on the foot before the boy was taken to the children’s hospital.

“Our lifeguards were on the beach doing their morning pt, physical training when they heard a horrific scream off in the distance, they ran down the beach to find find a 12-year-old male who was in the water bleeding from his right foot,” said Fort Lauderdale Fire Rescue Battalion Chief Stephen Gollan.

“This time of year, we see a lot of bait fish that are coming down the coast. It’s the ocean. It’s very natural for these fish to be feeding,” said Gollan said, reported WSVN.

Christian said he plans to still go swimming but will be more cautious in the future.

A 26-year-old visitor is recovering in the hospital after she said she was bitten by a shark off the Big Island yesterday. She shares a statement about what happened on Tuesday, August 20 in Kealakekua Bay. https://t.co/ajYkf0PVlc

A shark bit a woman in Hawaii this week, authorities said.

The Hawaii Police Department said that a 27-year-old woman was swimming off of Napoopoo Park in Kealakekua Bay when she was bitten.

“She received injuries to her lower back and right hip area and was transported to the Kona Community Hospital where she received treatment. She was reported to be in good health and is expected to be released. The shark was described by a witness as having a grey tip. It’s size and the type of shark is currently unknown. Swimmers are being advised to avoid the area of Kealakekua Bay,” the department stated.

Adventures in Paradise guide Lalu Gardner said he was leading a group kayak tour when he heard the woman screaming.

“She was about 30 feet from shore, blood everywhere. A wave came, and she got swept back to shore,” Gardner told the Hawaii Tribune-Herald. He said she appeared to have been bitten on her back and upper thigh.

Katherine Williams was in the water with her husband and two friends who said they kayak and paddleboard daily when they started being followed by a shark on Tuesday. They were able to get away from the shark, but they said this event is unusual.

“Nobody has ever been bit here,” she said. “We paddle here every day. We know they (sharks) are there, but we’ve never been scared.”