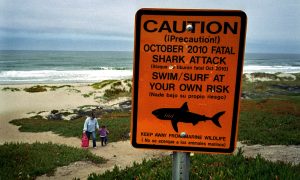 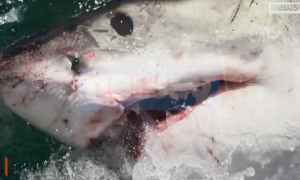 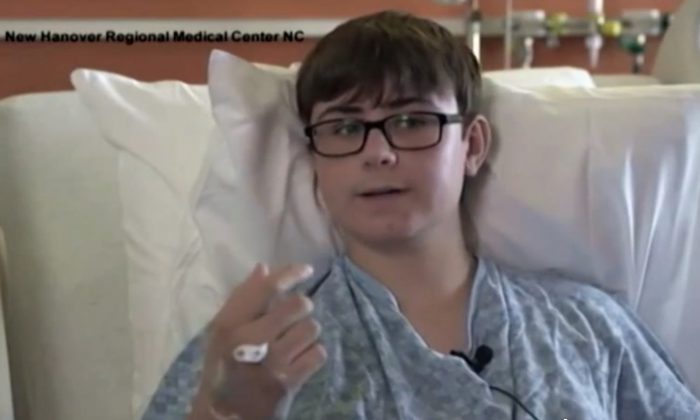 Shark Attack Survivor: Fish Was ‘Biting up My Left Arm’

A teen seriously wounded after a shark attack in North Carolina says he felt the big fish before he saw it and didn’t realize what it was until it was “biting up my left arm.”

“We were just playing around in the waves, and I felt a hit on my left calf,” 16-year-old Hunter Treschl said in a videotaped interview released Tuesday night by the hospital where he is being treated. “I thought it felt like a big fish, and I started moving away. And then the shark bit my arm — off.”

Treschl said he was able to make it on to the beach in Oak Island, North Carolina, with the help of a cousin who had been in the water with him. He said one of the people who ran to his aid had a belt with him that he used as a tourniquet to stop the bleeding, while others “were all helping me kind of stay calm until the ambulance got there.”

Asked if he ever saw the shark, Treschl said he first felt it hit his left leg before it hit his arm.

“That was the first time I saw it, when it was biting up my left arm,” he said in the videotape, released Tuesday night by the New Hanover Regional Medical Center in Wilmington, North Carolina.

The Colorado Springs, Colorado, teen says he is going to try to live a normal life despite the loss of his dominant hand.

“I have two options: I can try to live my life the way I was and make an effort to do that even though I don’t have an arm, or I can just let this be completely debilitating and bring my life down and ruin it,” he said.

“Out of those two, there’s really only one that I would actually choose and that’s to try to fight and live a normal life with the cards I’ve been dealt.”

A little more than an hour before the shark attacked Treschl and about 2 miles away Sunday, a 12-year-old Asheboro girl, Kiersten Yow, lost her left arm below the elbow and suffered a leg injury when a shark bit her.

Yow was in stable condition Tuesday at N.C. Children’s Hospital at the University of North Carolina, according to a statement from her parents, Brian and Laurie Yow.

“She has a long road to recovery that will include surgeries and rehabilitation, but her doctors at UNC expect she will keep her leg, and for that we are grateful,” they said, appealing for time to deal with the trauma privately.