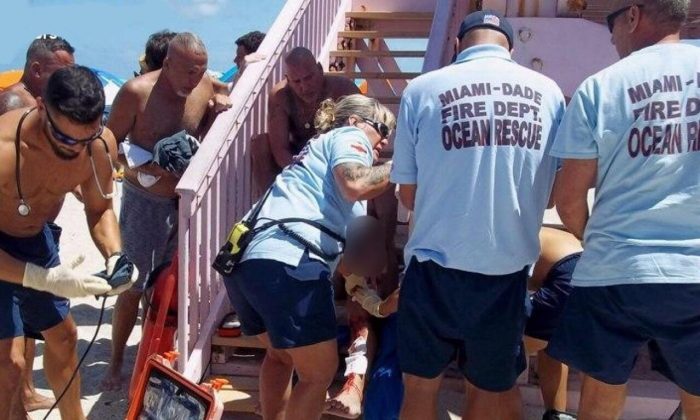 A man was bitten by a what officials thought was a bull shark while swimming at a south Florida beach.

The unnamed beachgoer was bitten on both of his legs by a shark just off shore of Haulover Beach, about 8 miles away from Miami Sunday afternoon, July 9.

Lifeguards had just called swimmers in after spotting increased shark activity, but Lt. Felipe Lay of Miami-Dade Fire Rescue told CBS Miami that the man didn’t quite make it out of the water in time.

“He was up in the north end of Haulover Beach and he was in the water coming off the sandbar when he noticed the lifeguards were trying to get his attention to come in,” said Miami-Dade Fire Ocean Rescue Lt. Matthew Sparling. “While he was walking up the sandbar, he went through a little deep water and was struck by the shark.”

After being pulled from the water, lifeguards applied medical aid to the man’s injuries before he was taken to Aventura Hospital. Although there has been no update on his status, officials said that the injuries were non-life-threatening.

Officials told CBS Miami that the bull shark was about 4 feet to 5 feet in length, and was spotted by lifeguards moments before attacking the victim.

After the incident, officials reminded beachgoers to always swim near lifeguard stations and be looking out for warnings from the lifeguards. Still, officials admit that incidents like this are very rare.

“I’ve worked here 20 years and I’ve done research and I’ve never seen a shark attack in Miami-Dade County that was unprovoked,” said Lay in a video interview with CBS Miami, with a view of the beach behind him.

According to the Florida Museum of Natural History’s website, there have only been 619 cases of shark attack in Florida since 1926, and 493 of those cases were unprovoked attacks. The number of attacks that led to fatal injuries is also only a small portion of this already small statistic.

Regardless, following the advice of ocean safety experts and cooperating with local lifeguards is the best way to ensure your safety at the beach.