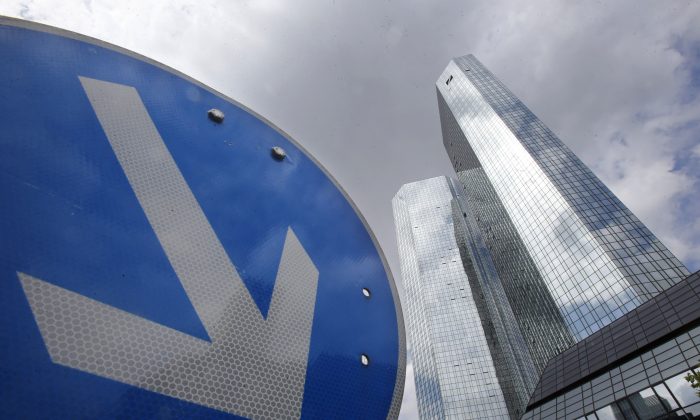 Shares of Deutsche Bank Plunge Amid US Legal Dispute

FRANKFURT, Germany—Shares in Deutsche Bank AG plunged Friday after the revelation that the U.S. Department of Justice has proposed the bank pay $14 billion to settle civil claims over its handing of residential mortgage-backed securities.

It’s the latest blow for Germany’s biggest bank by assets, which is in the middle of a painful transition as it tries to meet tougher regulatory requirements, cut costs and settle multiple legal investigations.

Deutsche’s shares were down 8.1 percent at 12.04 euros in afternoon trading in Europe.

Independent Financial Analysis and the Case of Deutsche Bank

The bank indicated that it has “no intent” to settle at the level cited.

“The negotiations are only just beginning,” the bank said in a statement emailed in the early hours of Friday. “The bank expects that they will lead to an outcome similar to those of peer banks which have settled at materially lower amounts.”

That did little to reassure markets, which have been punishing bank stocks across Europe after a run of weak industry profits. Record low interest rates have narrowed the difference between the bank’s borrowing costs and what they earn in interest on loans, eroding profits.

German Finance Ministry spokeswoman Friederike von Tiesenhausen said Germany was “aware that U.S. authorities have agreed with other banks on settlement payments, and so the German government assumes that a fair result will be reached at the end of this process as well, on the basis of equal treatment.”

She was asked whether German officials had the impression that the settlement demand was some sort of retaliation to the European Commission’s ruling that Ireland gave 13 billion euros in illegal tax breaks to U.S. firm Apple.

Are Deutsche Bank Asia Ties the Straw Breaking the Bank’s Back?

Deutsche Bank is among many financial institutions investigated over dealings in securities based on mortgages to people with shaky credit in the run-up to the 2008 financial crisis.

The U.S. government has accused the banks of misleading investors about the quality of the mortgage loans. Earlier this year, the Justice Department announced a roughly $5 billion settlement with Goldman Sachs over the sale of mortgage-backed securities. Other banks that settled in the last two years include Bank of America, Citigroup and JPMorgan Chase & Co.

While promoted as relatively safe, such securities contained residential mortgages from borrowers who were unlikely to be able to repay their loans. That led to huge losses for investors, kicking off the recession that began in late 2007 as the housing market collapsed and investors suffered billions in losses.

Deutsche’s new CEO John Cryan has led a cost-cutting and restructuring drive that’s involved job cuts and the bank’s withdrawal from some smaller countries. He has said the bank is determined to clear up its legal problems but has stressed that the matters are not fully in the bank’s control.

Deutsche Bank made a scant 20-million euro profit in the second quarter despite 7.4 billion euros ($8.3 billion) in net revenue. That followed a 6.7 billion-euro loss recorded in 2015. The International Monetary Fund in June said the bank was the largest net contributor of risk to the financial system among the world’s largest global banks.