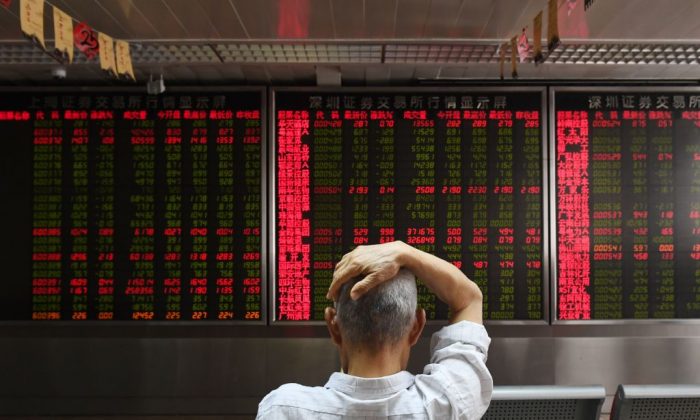 Major shareholders of listed Chinese companies are seizing the chance to quickly sell off their holdings as China’s stock market seems to ease up during the 90-day trade truce between the U.S. and China.

Due to the U.S.-China trade war, China’s stock market has been in crisis. Stock prices plummeted rapidly with the total market value shrinking by more than a quarter this year. Listed companies, especially those in the private enterprise capital chain, are on the verge of collapse, so the Chinese Communist Party (CCP) has been forced to bail out the stock market.

After top Chinese officials issued promises to bail out the stock market and the measures were implemented across local governments, China’s stock market index rebounded slightly from the October trough.

However, major shareholders of listed companies seized the opportunity to reduce or sell their holdings, so now stock prices are again in danger of falling.

Speculation is prevalent throughout the Chinese stock market. The CCP’s bailout produced a lot of “bailout concept stocks.” When listed companies were included in the bailout list, their stock prices will rise quickly. As a result, major shareholders took the opportunity to sell some or most of their holdings, rather than being mollified by the measures.

For example, five days after Poten Environment Gr Co received bailout funds of 100 million yuan ($14.53 million), it announced to sell major stocks on Nov. 19. Its three major shareholders made plans to sell their holdings of 126 million shares, accounting for 31.35 percent of the company’s total share capital. The accumulated amount of money was 2.28 billion yuan ($0.33 billion) with the closing price 18.1 yuan ($2.63) on Nov. 19.

In China, A shares, also known as domestic shares, are denominated in Chinese yuan and traded in the Shanghai and Shenzhen stock exchanges, as well as the National Equities Exchange and Quotations.

China’s Changjiang Times reported on Nov. 29 that 184 A shares companies had stock reduction announcements, planning to reduce their holdings by 2.242 billion shares. Many of these companies had just received the bailout funds. Since November, in addition to the Poten Environment, major shareholders of listed companies such as Suzhou MedicalSystem Tech, Shanghai KangDa New Materials Co., Ltd., and ArcherMind Technology have been selling major parts of their holdings.

Chinese A shares, known as domestic shares, are shares that denominated in Renminbi and traded in the Shanghai and Shenzhen stock exchanges, as well as the National Equities Exchange and Quotations.

The stock crunch in November was not an isolated case . According to the statistics of Shanghai-based Wind, a leading financial data, information and software services company in China, as of Oct. 10, major shareholders of A shares made a net reduction of 3.431 billion shares this year, with accumulated cash reached 71.914 billion yuan ($10.45 billion).

Those in the industry believe that shareholders sell holdings mainly for earning investment income and supplementing liquidity. Under normal circumstances, they sell holdings in a bull market, which means the condition of a financial market of a group of securities in which prices are rising or are expected to rise.

But China’s stock market is in a bear market, indicating a period of several months or years during which securities prices fall consistently, nevertheless, shareholders are selling their holdings, which implies that they don’t think their companies and the market have much chance for success in the future.

While major shareholders of listed companies sell their holding to get cash on a large scale, the restricted stocks of listed A shares companies becoming transferable will be on the peak in December.

According to the statistics provided by Wind, 232 companies will trade their restricted stocks in December, accounting for 6.5 percent of the total number of listed A shares companies. The transferable restricted shares are 56.237 billion shares in December, 2.82 times as compared with November.

From the perspective of the market value, the total value of transferable restricted stocks in December was 411.675 billion yuan ($59.81 billion), 2.84 times that of November.

Yue Tao, China-based financial commentator, posted an analysis on his WeChat on Nov. 21 in which he said that the way the Communist regime bails out private enterprises in effect bails out their major shareholders. When the listed companies get the money, the major shareholders immediately get rid of their holdings in exchange for cash. Yue said when the government or the banks give out the money, which comes from tax revenue, to the enterprises, it is indirectly taken away by the major shareholders, who sell their holdings and leave the stock market, and then investors take over.

In other words, the CCP uses the Chinese people’s money to bail out the stock market, but those who really benefited are not the non-listed private enterprises or investors, but the major shareholders of listed companies. The latter often have intricate relationship with the CCP elites, so they can get the government bailout funds more easily. In the end, the consequences of falling stock prices will be borne by common investors.

He Jian contributed to this report